“What do you think would happen near your home if there was a sudden flood of weapons for anybody to use?

– Pentagon Has Flooded Iran and Afghanistan with More Than One Million Guns: 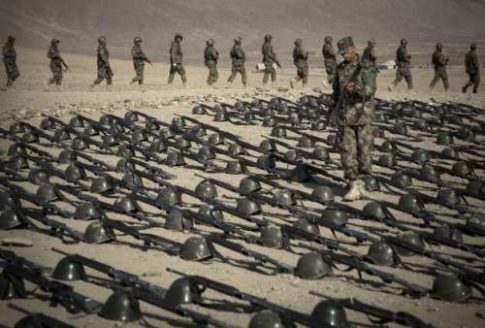 An Afghan Army soldier picks up his weapon at a training facility in the outskirts of Kabul, Afghanistan, Tuesday, Nov. 26, 2013.  Anja Niedringhaus/AP

The Pentagon has spent billions of dollars since 2001 funneling roughly more than a million assault rifles, pistols, shotguns, and machine guns into Iraq and Afghanistan, helping to fuel lasting conflict there, according to a new report by a London-based nonprofit research and advocacy group Action on Armed Violence.

If the figures are correct, the US exports amounted to more than one small arm for each member of Afghanistan’s security forces, which totaled roughly 355,000 soldiers, police, and airmen in February 2015, according to a NATO operational update on the force. The number of armaments sent to Iraq also vastly exceeded the current size of that country’s active military and paramilitaries – 209,000, according to the International Institute for Strategic Studies’ 2016 Military Balance report.

Until now, the Pentagon hasn’t published such a tally of its own, so the group’s researchers spent a year scouring multiple databases to arrive at its estimate: a general Pentagon contract list, a government-wide contracting list, and multiple government reports on military spending. They finally calculated that the overall value of the contractually-agreed small arms shipments, just to those two countries, was roughly $2.16 billion.

U.S. intelligence reports and eyewitnesses have previously said that a significant fraction of the U.S.-financed arms were either lost or stolen, and that many wound up in the hands of forces opposed to US interests, including terrorist groups such as the Islamic State, or ISIS.

In 2007, for example, the General Accountability Office said the coalition forces in Iraq could not account for 190,000 U.S.-supplied weapons. A July 2014  audit by the Special Inspector General for Afghanistan Reconstruction sharply criticized the Pentagon for not paying adequate attention to the fate of weaponry sent to Afghanistan, citing rampant discrepancies in records of gun serial numbers and other problems. In many instances over the past two years, U.S.-advised forces in those two countries have engaged in protracted clashes with terrorists equipped with captured caches of U.S. small arms, as well as U.S. tanks, artillery, and armored personnel carriers.

“There are direct and real consequences,” said Iain Overton, a veteran investigative journalist who is the group’s director, including “a destabilized Middle East.” He said Americans believe “that good guys with guns will get rid of bad buys with guns but that system doesn’t work when you throw guns into lawless, anarchic societies.” His group says its funding comes from “governments, institutions, and foundations,” and that it has a “partnership” with Norway’s Ministry of Foreign Affairs.

The report was released as international discussions are under way in Geneva about how to improve the implementation of a 2013 accord meant to provide transparency about small arms transfers, known as the Arms Trade Treaty. While the treaty does not restrict the number or type of weaponry that can be exported, it asks signatories not to sell arms that will create an overwhelming risk of negative consequences, including war crimes and attacks on civilians. The United States has signed the treaty but has not ratified it and is not a state party. As a result, it has not submitted annual reports of its arms transfers to others, as the treaty requires.

Sign up for the Center for Public Integrity’s Watchdog email and get the news you want from the Center when you want it.

Indeed, finding information on arms exports to Iraq and Afghanistan is like trying to “[put] together a jigsaw puzzle with only half the pieces,” Nic Marsh, a researcher at the Peace Research Institute in Oslo, Norway who has worked on this issue since 2008 said in an email. Overton’s first attempts to gather information from the Pentagon about U.S.-financed exports of AK-47’s to Afghanistan, using the Freedom of Information Act, produced documents that he said were completely redacted.

[USG procures its own AK47 factory just as US sanctions block purchases of Kalashnikovs from Russia.]

It’s clear that the Pentagon has not been eager to make the size of its small-arms exports as clear as it could. The Pentagon’s public announcements of contracts related to small arms exports to Iraq and Afghanistan, overseen by its press office, only list 19,602 of the 1.45 million small arms, or roughly 1 percent of the guns the department actually sent to Iraq and Afghanistan, the group’s report said. Of those publicly-disclosed contracts, a third were either mis-numbered or contained different information than versions of the same contracts that were listed in the Federal Procurement Database System, the report said.

When asked about the discrepancies, Mark Wright, a Pentagon spokesperson, responded in an email to the Center for Public Integrity that the two public accounts are based on different definitions, “which if not clearly understood, can lead to incorrect conclusions.”

Wright gave a slightly smaller overall tally: “We have a total of about 1.1 million weapons that DOD either provided or assisted in providing to Iraq and Afghanistan,” he said, noting that in some cases, individual contracts might have spelled out the maximum number of arms authorized to be shipped, rather than the number actually sent.

Overton said he stood by his larger tally, and that the team scoured their information for inaccuracies after carefully examining the differences between various databases.

Asked whether or not the Pentagon attempts to track where the guns it sells wind up, Wright responded that speed was “essential” in the early years of the wars in Iraq and Afghanistan. “As a result, lapses in accountability of some of the weapons transferred occurred,” Wright wrote in an emailed statement also provided to other reporters asking about the group’s report. He said that the department now “tracks the origin, shipping, and in-country distribution of all weapons” it exports to Iraq and Afghanistan.

But even if such measures are carried out with great care – an unlikely event in Afghanistan, given the documented low literacy rates among local security personnel there, they cannot prevent U.S. armaments from being seized by others on the battlefield. The United States is not the only country that provided weapons to Iraq and Afghani forces that went missing over the past fifteen years, and not the only one to have exported weapons that specifically ended up in the hands of terrorists. In 2014, the Center for Public Integrity reported that fighters associated with the Islamic State had acquired or seized weapons from at least 21 countries, including the United States, China, Russia, and several Balkan states.

“A significant percentage of these weapons will go into the environment and eventually end up in the hands of the Taliban, ISIS” and other non-state actors, says Ed Laurance, an expert on armed violence and professor of international policy and development at the Middlebury Institute of International Studies at Monterey. “Ammunition comes in, it goes out. Terrorists can get it, civilians can get it…it’s impossible to keep track of [small arms]” because the environments are so insecure.