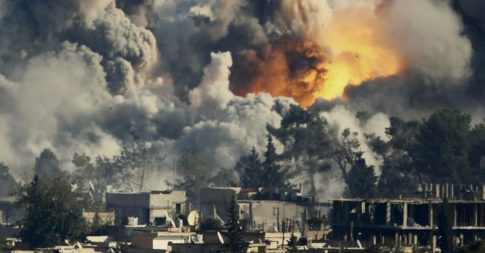 – Why the Media Isn’t Reporting on the US Soldiers Nearly Hit by a Syrian Airstrike:

On August 19, American troops in Northern Syria nearly lost their lives. A joint team of elite American special operations troops and Kurdish fighters on the ground in Syrian territory were fired upon by a Syrian Su-24 warplane. One would think that given the Obama administration’s previous aspirations of going to war with Bashar al-Assad’s regime in Syria, the mainstream media — in tandem with government officials — would be loving the opportunity to immediately hit back at the Syrian regime.

According to Foreign Policy, U.S. military officials contacted their Russian counterparts also operating in Syria in response to the strikes, who offered their assurances that their planes weren’t operating in the area. “We made clear that Coalition aircraft would defend its troops on the ground if threatened,” said Marine Maj. Adrian Rankine-Galloway, a Pentagon spokesman in an email. “The Syrian Regime would be well advised not to interfere with Coalition forces or its partners,” he added.

Yet this story is hardly making headlines anywhere, and despite these warnings, no immediate action has been taken.

If the corporate media ran with the story that U.S. troops almost lost their lives in Syria, it would open up a whole can of worms they probably could not contain. Stories of sending troops to Syria are supposed to fly under the radar with little media coverage.

Most importantly, where are these operations headed?

Now that a top U.S. commander has gone on record to warn Russia and Syria that the U.S. will defend American special operations forces in Northern Syria if they come under fire from the regime again, it should be clear where this conflict is headed.

Together with the warning from Marine Maj. Adrian Rankine-Galloway that if Syrian planes should fly in certain parts of their own country the U.S. will use their “airpower as needed to protect coalition forces and our partnered operations,” this paints a grim picture of the future of the Syrian battlefield. “Partnered operations” includes Kurdish fighters who have recently been targeted by Syrian warplanes.

Most frightening, however, as it transpires, is that U.S. troops are also working in tandem with Turkish troops now fighting inside Syrian territory.Turkish tanks and warplanes are also accompanying the Turkish troops. If Syrian warplanes feel compelled to target an invading ground force such as the Turks, they officially risk being shot down by coalition aircraft.

It is the wartime equivalent of breaking into somebody’s home and sitting in their kitchen while at the same time warning the owner to stay clear of the kitchen or risk being shot by the perpetrator.

The U.S. has finally found their loophole to turn their missiles on Assad. Of course, this announcement should be no surprise to anyone who has been following the Syrian conflict. This was the goal of U.S. operations within Syria the whole time, given that the U.S. has been looking to unseat Assad from Damascus for years.

The fact this comes at a time when Russian, Chinese and Iranian involvement in Syria is growing and as a fierce battle over the strategic city of Aleppo is occurring is no accident.

The Obama administration has duped the U.S. that a war that could be the world’s last.

Alois Irlmaier foresaw what we are going through now in around 1950.