– France To Deploy 3,000 Troops To Schools: “The Threat Is Real” Education Minister Says:

Two weeks ago we reported that as part of its proactive effort to tackle future terrorist attacks, the French government announced that starting in September, French 14-year-olds would receive lessons how to survive a terrorist attack on their schools, following a spate of Islamist killings in recent months.  It appears that was not enough, because earlier today the France interior minister Bernard Cazeneuve announced France would deploy about 3,000 reserve troops, train school authorities and ramp up school anti-terror drills in case of attacks, its education and security ministers announced on Wednesday, a week before the start of a new academic year. 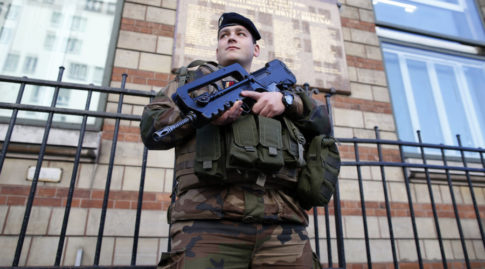 “The threat is high, it is real,” Education Minister Najat Vallaud-Belkacem, said during a joint news conference in Paris alongside Cazeneuve. “This is not about ceding to panic or paranoia,” she added quoted by Reuters.

About 12 million students are expected to head back to school across France from on Sept. 1. All students aged 13-14 will be adding basic life-saving measures to their portfolio of skills, in case they need to provide assistance to classmates in a worse-case scenario. Right now, only 30% of students are trained, the Education Minister said in a Wednesday press conference, according to AP.

Around 500 school administrators will be trained every year at the national gendarme training center to manage crisis centers and act as liaisons with security officials, while some 1.2 million students in the fourth year of secondary school are expected to be trained in first aid. In addition to training students and staff stepping up to the plate, security forces have been ordered to be particularly vigilant around schools, and some 3,000 gendarme reservists will be deployed to provide reinforcement for local authorities, including police, Reuters reported.

“Throughout the year, particular attention will be put around schools. Active surveillance around schools, high-schools and universities will be reinforced by roving patrols,” Cazeneuve said. RT adds that the government has decided to provide 50 million euros ($56.2 million) to local councils to help them pay for security equipment such as video door phones and new alarm systems.

As previously reported, anti-terror drills in schools will also be increased to three per academic year, up from the current requirement of two drills per year. During those drills, students will be taught how to hide or escape. At least one drill will include a mock assailant entering the premises. Children aged two to six should not be told of any attacks or dangers during the drills, but will be taught to hide and keep quiet through games.

The French announcement comes at the same time as Germany is deciding whether to put “troops on the streets” to protect the population from terrorism. While a formal decision has yet to be announced, Europe’s distinct creep toward increasing militarization of society continues.