– The Oddly “Inconsistent” Event That Has Turkey Wondering If The Entire Coup Was Staged:

The question marks around the failed Turkish “coup” continue to pile up.

Several days ago we reported that in one of the most glaring inconsistencies surrounding the failed military attempt to overthrow the Turkish president, at the height of the attempt to overthrow Turkish President Tayyip Erdogan, the rebel pilots of two F-16 fighter jets had Erdogan’s plane in their sights. And yet he was able to fly on.

“At least two F-16s harassed Erdogan’s plane while it was in the air and en route to Istanbul. They locked their radars on his plane and on two other F-16s protecting him,” a former military officer with knowledge of the events told Reuters. “Why they didn’t fire is a mystery,” he said.

Now a new mystery that just “does not add up”, has emerged.

According to the government’s official narrative, rushed together in the days after the coup, there was an attack on Saturday morning by helicopter-borne commandos against a resort hotel in Marmaris. President Recep Tayyip Erdogan was meant to be staying there. But the attack took place nearly an hour after every news channel in Turkey beamed images of Mr Erdogan addressing the nation from the airport in Istanbul, some 750km away. 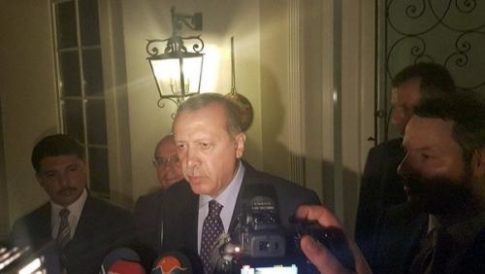 As even the FT skeptically reports, “that episode is one of many inconsistencies and strange occurrences in a coup whose amateurish — almost kamikaze — nature preordained its failure and is now providing rich fodder for conspiracy theories. That Turkey is so polarised — roughly split between those who love and hate Mr Erdogan — has only added to the froth.”

As a result of the gaping holes in the story, even the central issue of who was behind the coup is now contested reality. According to a snap poll a third of Turks believe Erdogan himself, who says his own life was threatened, was behind the coup. (The poll, by London-based Streetbees, queried about 2,800 Turks, two-thirds via mobile apps, and a third in person.) 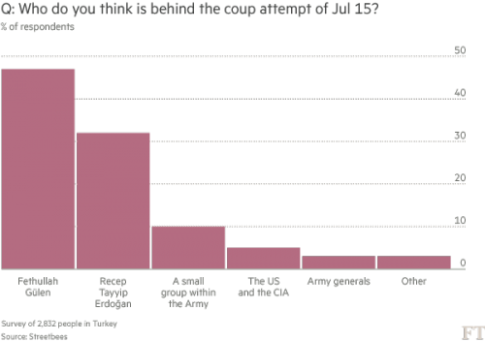 However, that helicopter raid, along with reports that Mr Erdogan’s plane was pursued by two fighter jets that never opened fire, some argue, is evidence that his life was never in any real danger.

To be sure, voices have quickly emerged slamming any such allegations as “preposterous” conspiracy theories. “Turks, like a lot of people around the world are given to conspiracy theories — simplistic explanations for complex events for things they don’t fully understand,” said Ross Wilson, a former US ambassador to Ankara now at the Atlantic Council. “Did Erdogan secretly engineer this, which is preposterous, or did the United States engineer this, which is equally preposterous?”

However for the locals, who have extensive experience with “conspiracy theories” that end up becoming conspiracy fact, especially when it comes to the government, things are not quite so clear cut. Those seeking holes in the government’s version of events about the coup are particularly focused on an offhand comment made by Mr Erdogan on Saturday, where he called the coup “a gift from god to fully cleanse the army.”

And, as we have repeatedly reported, the zeal with which his government has since seized upon their opponents, firing or detaining as many as 20,000 people within two days, has raised questions as to whether the failed coup has simply provided him with the opportunity to pursue longstanding aims.

Of course, Turkish officials furiously reject that notion. They say that the lists of those arrested were a long time in the making, the result of investigations that mapped their networks, but failed to detect the coup itself.

In an highly amusing quip, Ibrahim Kalin, the president’s spokesman said that “it’s funny that people still talk about this. Those who accuse us [in Turkey] of conspiracy theories are now presenting this nonsensical stuff as political analysis and commentary. If this was not a coup, what is a coup?” Well, a coup – for starters – is one where there is no military raid on a presidential vacation spot hours after he has left it.

Meanwhile, skepticism continues to grow: Both online, and in personal interviews, Turks who believe Mr Erdogan staged the coup himself say that its failure is proof enough — the military in this country knows how to topple a government, having done so several times before.

“Why people believe this conspiracy is that it has more to do with the blueprint to the coup,” said Sinan Ulgen, a former Turkish diplomat and chairman of Istanbul’s Centre for Economics and Foreign Policy Studies, “People in this country remember past coups. They already have a frame of reference of what a coup should look like, and this didn’t fit.”

What does fit, however, is Erdogan’s response to the coup, real or faked: the authoritarian president is on his way to cementing all power in the country while eliminating all political, miltary, educational and press opposition.