Update: A huge fire erupted in a residential building in the Turkish capital of Ankara on Tuesday, an official said as cited by Reuters. Earlier Sky News Arabia reported that a huge blast had hit the city.

Images of a massive black cloud of smoke rising above Ankara emerged on social media, as the city recovers from Friday’s attempted coup.

The incident reportedly happened near one of the city’s universities.

Moments ago Turkish assets took another leg lower following local press reports of a massive explosion rocking Turkey’s capital Ankara. According to initial unconfirmed reports, the explosion may have taken place at a local TV station.

According to the first official reports, Turkish Kurryiet says the smoke in Ankara is from a fire, not an explosion, although that would not explain the numerous ear-witness reports of, well, an explosion.

#Turkey#UPDATE Black clouds imerge as a huge explosion rocked the city of #Ankarapic.twitter.com/2HcYYbsuoX

#BREAKING: Explosion in #Ankara#Turkey. Smoke seen in the area pic.twitter.com/ekMz59rSRd

The Turkish currency, already weaker on the day, has tumbled more, and is approaching post-coup lows. 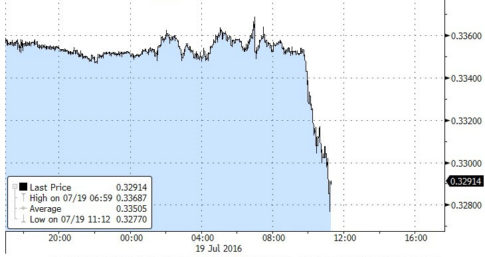