Having arrested those who were supposedly directly involved in the attempted coup, which at last count this morning amounted to over 6,000 individuals of which 3,000 members of the army (or less than 1% of Turkey’s 315,000-strong forces) and the Turkish legal system, including judges and prosecutors. That Erdogan was so quick in assembling a list of enemies in the judicial branch, whose arrests started early on Saturday even before the coup was fully doused, is the clearest indication that Erdogan was not only prepared for the “coup”, but its inevitable outcome.

However, it was the next step that was the critical one: the one where Erdogan – having cracked down on his immediate military and legal opponents – took his crusade against everyone else, including the press and the educational system.

The first inkling of the upcoming “witch hunt” took place earlier today, when the Turkish police asked “citizens” to report those who support terrorism and crime. In other words, McCarthyism reborn, only this time the bogeyman is not communism.

And then, just hours later, we found out that the first casualty of this expanded witch hunt was none other than a person who had absolutely no involvement in the coup: a former university record, whose only crime was being a government critic, who moments ago tweeted that he was being arrested.

Turkey’s witch-hunt kicks off. Former university rector, a govt critic, tweets that he is being arrested. https://t.co/psgC3R31Ir

What happens next: an acceleration of the counter-putsch of course, with many more arrested, whose only crime is being guilty of criticizing the government.

The endgame is simple – it is shown in the “chart” below. 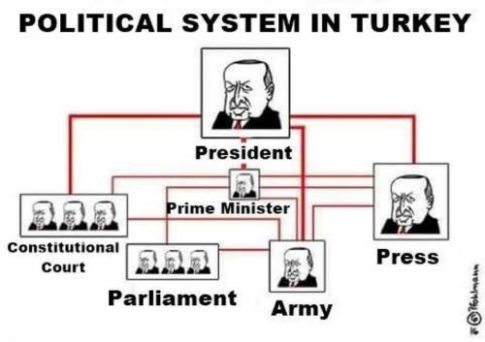