– 26 Million Americans Are Now “Too Poor To Shop” Study Finds:

A new study finds that roughly 26 million Americans remain “too poor to shop”. The study, performed by America’s Research Group, found that about 26 million Americans work on average two or three jobs at a time which, when added together, nets just shy of $30,000 in annual income. All while supporting anywhere from two to four children.

The chairman of ARG, Mr. Britt Beemer, said in an interview with the NY Post that he first started looking into data when he was tracking a different indicator. Beemer first started tracking a group and surveying roughly 15,000 people to determine who had not finished Christmas shopping in 2014. During that year, the number was 21 percent but recently ran as high as 29%. From there Beemer decided to analyze the data further and learned American’s are seeing increasing numbers of fellow citizens who are simply just too poor to shop.

Beemer told the Post: “The poorest Americans have stopped shopping, except for necessities” and “It’s scary when you start to see things that you’ve never seen before”…”People are so pessimistic about their future”

Just this past April we wrote: “most Americans’ savings continue to decline, and millions of US households not only don’t have any money left over to save away, but are forced to resort to credit to fund day to day expenses.” 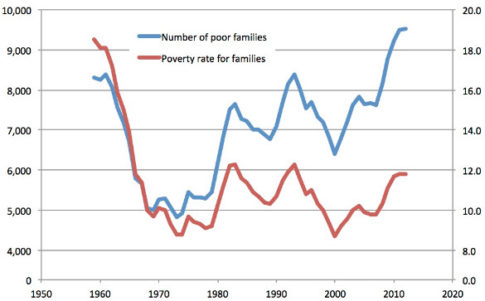 Recall from January the piece from the Atlantic that review that weak state of American’s finances. The Atlantic learned that nearly 50% of Americans were not in a position to find $400 to pay of a doctor visit without reaching out to friends So not only are 26 million Americans too poor to shop, there are also 2/3 of Americans who have no savings.

“Various surveys that I have talked about in the past have found that more than 60 percent of all Americans are living to paycheck to paycheck, but I didn’t realize that things were quite this bad for about half the country. If you can’t even come up with $400 for an unexpected emergency room visit, then you are just surviving from month to month by the skin of your teeth. Unfortunately, about half of us are currently in that situation.“

As The NY Post details, retailers have blamed the weather, slow job growth and millennials for their poor results this past year, but a new study claims that more than 20 percent of Americans are simply too poor to shop.

These 26 million Americans are juggling two to three jobs, earning just around $27,000 a year and supporting two to four children — and exist largely under the radar, according to America’s Research Group, which has been tracking consumer shopping trends since 1979. “The poorest Americans have stopped shopping, except for necessities,” said Britt Beemer, chairman of ARG.

Beemer has been tracking this subgroup for two years, ever since his weekly surveys of 15,000 consumers picked up that 21 percent of consumers did not finish their Christmas shopping in 2014 due to being too busy working.

That number grew to 29 percent last year, and Beemer dug in to learn more about them, calling them on holidays. He estimates that this group has swelled from 6 million households four years ago, because their incomes have not kept pace with expenses like medical costs.

Nearly half of all Americans have not seen an increase in salary over the last five to seven years, and another 28 percent have seen their take-home pay reduced by higher medical insurance deductions or switching to part-time jobs, ARG found. “It’s scary when you start to see things that you’ve never seen before,” said Beemer.

“People are so pessimistic about their future.” Most of those living on the edge — 68 percent are women between the ages of 28 and 38 — work in retail or in call centers, according to Beemer.

Another sign that a chunk of the population has pulled back its spending is that discounters like Walmart and the Dollar Store have been “holding their own,” said Richard Church, managing director of Discern Securities.

The story of the increasing difficulty facing Americans in maintaining their standard of living continues… even after almost 10 years of Federal Reserve market-based intervention.