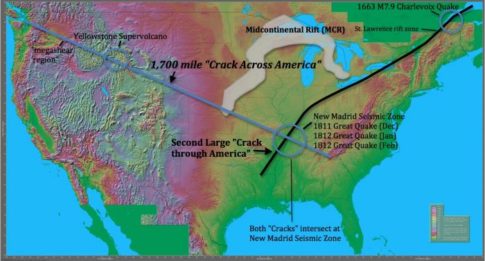 – Scientists Found a 1,700 Mile Crack Across the USA. Here’s What You Need to Know:

Is America at risk for Great earthquakes spanning across the full United States? “Cracks Across America”, in Rift zones, may conceal large fracture type faults where scientists may not be able to identify where these hidden fractures may unleash catastrophic earthquakes.

LOS ANGELES, CA (California Network) – In Nov 1981, a study was published that rocked the scientific world, and sparked concern in FEMA circles, in which a 1,700 mile “Crack Across America” was discovered. Worse yet, this crack cuts through the New Madrid Seismic Zone, where in 1811 and 1812 three giant earthquakes devastatingly struck the center of America. Scientists have been struggling, since then, to answer the question of what risk this mega feature may pose to our heartland today. Recently, and less known, is a study from an independent geologic research set of work [2], that has identified a possible second “Crack Through America” that crosses into and through the same volatile New Madrid Seismic Zone.

The original 1,700 mile “Crack Across America” was found using modern day gravity mapping satellite data, and using computers, to process the measurements [1]. In 1981, Dr. Raymond E. Arvidson of Washington University in St. Louis used data processing techniques where 600,000 discrete gravity measurements, from 20 years of scientific data gathering, to synthesize a map. The results revealed an astonishing ancient rift in the North American crust that extends some 1,700 miles from Idaho to the southern Appalachian Mountains. New discoveries, from more recent research, has extended this “Crack” anomaly in where it combines with a MegaShear [3] zone to the middle of Washington State and possibly with the Olympic-Wallowa Lineament (OWL) [2] – which reaches to the Pacific Ocean near Port Angeles Washington. Thus the total length may total nearly 2,200 miles.

This ancient rift, estimated to be a billion years old, was dubbed the “Missouri Gravity Low” in the eastern most section of the “Crack Across America”. Another rift, 60 miles by 30 miles, underlying the Mississippi river valley, called the “Reelfoot Rift”, was found to cross through the Missouri Gravity Low and head to the northeast/southwest. These two rift zones intersect at the New Madrid Seismic Zone. Over 4,000 small earthquakes have been mapped within these intersecting “rift” regions since 1974.

A maverick geologist, Jack Reed, performed a study in mapping the frequency and location of larger magnitude earthquakes trending along the northeast trending lineament of the “ReelFoot Rift”. The resulting data indicated another concerning revelation – that a possible second “Crack Through America” connects the Reelfoot Rift with the well known St. Lawrence rift zone in Canada. Just as the New Madrid Seismic zone revealed its active potential in its “rift zones”, a magnitude 7.9 earthquake, in 1663, struck near Charlevoix and revealed its power in the St. Lawrence rift zone.

Perhaps a partial clue to what may link to the existence and nature of the “Crack Across America” and the “Crack Through America” is the Midcontinential Rift (MCR) System. Research has identified that a movement direction of the MCR, from tremendous intraplate pressure, forced a southern expansion of this large rift, where the southern edge traversed directly towards the New Madrid Seismic Zone. The Midcontinental Rift thus forms a horseshoe that straddles and reaches, by its tips, at or near the two major “Crack” lineaments. Intraplate pressure could be intensified into these intersecting lineaments, including the resulting pressure(s) at the New Madrid Seismic Zone.

What can make these – 70-90 mile wide and thousands of miles long – low gravity crack lineament features so dangerous is their hidden fractures, buried in the earth’s crust below. These low gravity areas are called “Rift zones” where the continental crust tried to pull itself apart, but failed. The thinning of the crust enabled lighter density young rock to intrude, thus resulting in the lower gravity characteristics in the rift zones. Other recent studies have suggested that the thinning of the crust may occur from the delamination of heavier crustal rock “falling” down into the earth’s mantle. However, in the case of linear features of these long distance “lineament rift zones”, the case of random delamination from “falling” into the mantle would not be able to explain these highly organized structures.

The bigger the length and depth of a buried fracture and its subsequent pressure induced release, the greater the chances for this rupture to unleash a giant earthquake. Indeed, the three 1811 to 1812 M7-M8 earthquakes had rupture release areas comparable to any single biggest locked segment of the San Andreas CA fault region could do – except in the New Madrid quakes, it did it all in the same location with each huge quake spaced only a month apart. With thousands of miles of possible buried fractures within these lineaments, it’s possible that changes in intraplate pressure may be all that is necessary to activate a segment. Another unanswered question is if Yellowstone Supervolcano is susceptible or interactive with this lineament. Indeed, in 2002, geologists observed distant triggering of earthquake swarming at Yellowstone from the M7.9 Denali Alaska earthquake [4]. As the Denali earthquake was 2,000 miles distant, what would happen if a large earthquake within a rift zone lineament was much closer to Yellowstone? Certainly it would be useful to know if there were any susceptible buried fractures in the nearby lineament that traverses near Yellowstone Supervolcano. 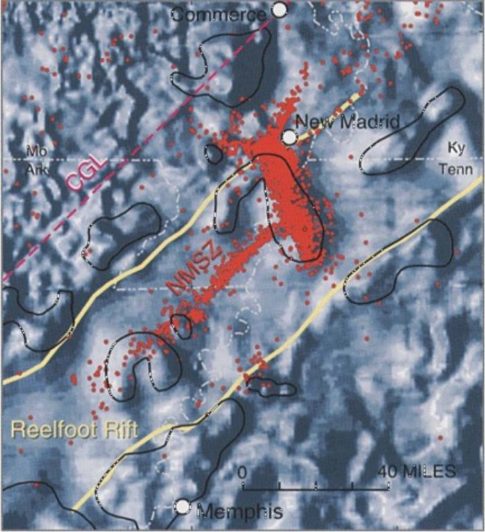 However, scientists are placed at a disadvantage, in earthquake risk assessment, since any hidden fractures are buried deep in what is called the “Midcontinental Basement”. Without having any data to the size, length, and number of any hidden fractures, it renders any risk analysis “blind”. Only a paleogeologic assessment of past locations, patterns, frequency, and magnitude of earthquakes are scientists able to form a type of a risk assessment. Compounding any risk assessment is understanding the rupture process of these hidden fractures. Scientists refer to these as “Intraplate earthquakes” as the quake occurs within the interior of a tectonic plate. Pressure, within the buried fracture (i.e. “fault”), may instigate an earthquake. GPS, strain sensors, and even inSAR (interferometric Synthetic Aperature Radar) are of no use to proffering answers to these questions as these fractures are inaccessible since they are deep below – while the sediment or crust above hides any telltale sign of crustal creep or stress. 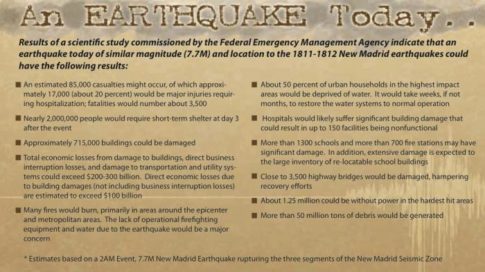 Fig 3. Estimates of the severe impact from a study commissioned by FEMA if a New Madrid Earthquake of M7.7 were to occur.

Because of risk assessment uncertainty, FEMA and other emergency agencies are left to estimating the risk to America’s infrastructure based on a worst case paleogeologic history (i.e. the maximum at any moment). Indeed, in 1999, FEMA listed as one of the major top four hazards in the United States, as “catastrophic”, would be a giant earthquake striking the central U.S.

Because scientists are unable to predict the timing nor the location of the next large earthquake in these Rift zones, there is a difference of viewpoints, regarding cost tradeoffs of implementation and/or upgrades of rigorous seismic building codes, between the scientific community and the emergency management organizations. Complicating this situation is that earthquakes, that occur in the central or eastern United States, affect much larger areas than similar magnitudes in the western United States. The FEMA guide references that the 1906 M7.8 San Francisco CA earthquake was felt 350 miles away in the middle of Nevada. In contrast, the 1811 New Madrid Earthquake was reported to have rung church bells in Boston, Massachusetts, 1,000 miles away. Differences in the geologic makeup of the earth’s crust east and west of the Rocky Mountains are noted to be the cause of this stronger conduction of the earthquake’s P-waves and S-waves creating the distant shaking contrast.

As the rate of earthquakes have been increasing in the New Madrid Seismic Zone and in other parts of the Central United States, such as in Oklahoma, there are concerns that intraplate tectonic pressure may be driving these trends. Other areas, such as the Wabash Valley and East Tennessee Seismic zones also produce earthquakes on a regular basis. Quoting from the CUSEC – “Depending on earthquake magnitude and location, each of these zones could impact multiple states, causing major physical, social and economic disruption in a region that is home to more than forty million people.”… “On April 18, 2008, a magnitude 5.4 earthquake struck near Mt. Carmel, Illinois. This relatively minor earthquake was felt in 28 states and Canada and was responsible for an estimated $3 million in non-structural damages and damaged at least 240 structures in Illinois alone. The Mt. Carmel earthquake shows the widespread impact a larger earthquake might have on the region”

Scientists now believe the Eastern U.S. could have a major quake of its own, and events like the New Madrid Great quakes may happen again, but there is no way to guess where or when. 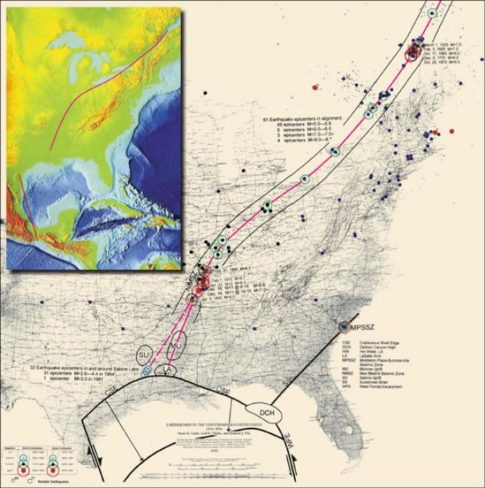 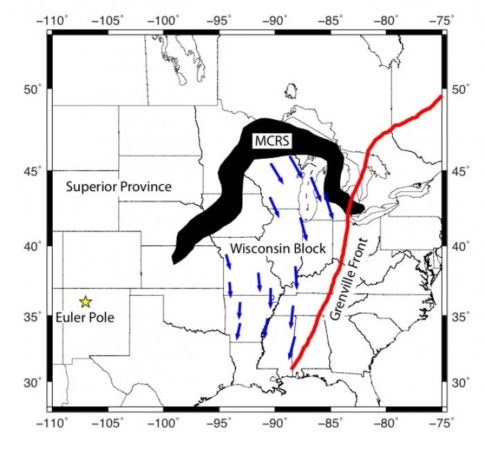