As first reported last night, and following up this morning, in an episode painfully reminiscent of the Bear hedge fund “freezes” that preceded the bank’s 2008 collapse and the great financial crisis, first the UK’s Standard Life halted trading in its property fund, followed hours later by both Aviva and M&G which likewise announced they are suspending trading in their own portfolio funds. And, as Bloomberg summarizes, three of the U.K.’s largest real estate funds have frozen almost 9.1 billion pounds ($12 billion) of assets after Britain’s shock vote to leave the European Union sparked a flurry of redemptions.

These were the first major dominoes to fall as a result of the confusion resulting from the Brexit vote. M&G Investments, Aviva Investors and Standard Life Investments halted withdrawals because they don’t have enough cash to immediately repay investors. About 24.5 billion pounds is allocated to U.K. real estate funds, according to the Investment Association.

The market reaction has been swift and brutal, sending stocks of the property-linked asset managers crashing. 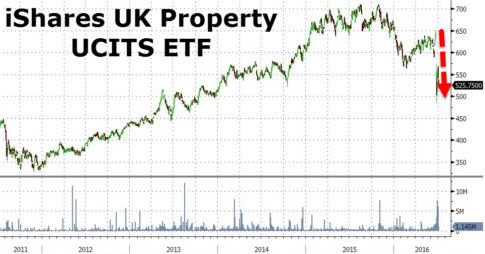 Standard Life is among firms, including Aberdeen Asset Management Plc, Henderson Group Plc, Legal & General Group Plc and M&G to adjust the value of assets in their property funds last week. Holdings in the funds range from an office building in Birmingham, to a mall in Newcastle and retail warehouses in Northampton.

“Investor redemptions in the fund have risen markedly because of the high levels of uncertainty in the U.K. commercial property market since the outcome of the European Union referendum,” M&G said on its website. Outflows “have now reached a point where M&G believes it can best protect the interests of the funds’ shareholders by seeking a temporary suspension.”

“The dominoes are starting to fall in the U.K. commercial property market,” said Laith Khalaf, a senior analyst at Hargreaves Lansdown. “The problem these funds face is that it takes time to sell commercial property to meet withdrawals, and the cash buffers built up by the managers have been eroded by investors heading for the door.”

Cited by Bloomberg, “the drop-off in inflows and then redemptions forces these funds to eat into their liquidity buffer,” much of which is held in real estate investment trust shares, Mike Prew, an analyst at Jefferies LLC, said in a note to clients on Tuesday.

While traders around the globe had been mostly focused on the downstream effects slamming Italian banks in recent weeks, the news of “freezing” UK property funds spooked global markets, and as a result the pound fell to its weakest level in three decades against the dollar Tuesday, surpassing lows reached in the aftermath of the Brexit vote. Bank of England Governor Mark Carney pledged to shore up financial stability on a day when a survey showed a plunge in U.K. business confidence, but has so far failed to achieve that.

The biggest concern prompting the redemptions is that according to industry commentators London office values could fall by as much as 20 percent within three years of the country leaving the EU. During the financial crisis of 2007 and 2008, real estate funds were forced to freeze operations after withdrawals surged, contributing to a property-market slump that saw values drop more than 40% from their peak in the U.K.

As Bloomberg adds, regulators had already planned to meet with the U.K.’s largest asset managers on Tuesday to discuss the effect of Brexit on the industry. The meeting – which could not come fast enough – takes place as the Financial Conduct Authority’s new chief executive officer Andrew Bailey told reporters that while the fund suspensions were not a “panic measure,” the regulator “may need to look at the design” of property funds. Just like the SEC looked at the design of open-ended junk bond funds during the late 2015 blow up in that asset space.

Other funds remain hopeful that redemptions will slow enough to prevent further gating:

Good luck, because as Emma Bewley, head of funds at Connection Capital in London told Bloomberg, “the potential impact of a high-profile liquid fund suspending redemptions shouldn’t be underestimated, particularly given the uncertain environment. While asset managers will seek to avoid suspending redemptions, they may have to use additional liquidity facilities” such as lines of bank credit.”

In other words, half a year after the junk bond mutual fund scare, and just months after most central banks unleashed the strongest salvo in the global race to debase yet, the global financial system finds itself in dire straits yet again.

Naturally, all of this assumes that Italian banks will remain perfectly solvent for the duration of the current crisis, something which as Matteo Renzi’s urges to get permission from Europe for a bank bailout suggests will not be the case considering he “hoped to use a liquidity backstop to contain investor panic, which could result in a run on deposits.” Because once the bank runs do start – precipitated of all things by fears that Europe’s brand new bail-in regime will be instituted in one of Europe’s largest economies, then it will really be time to panic.