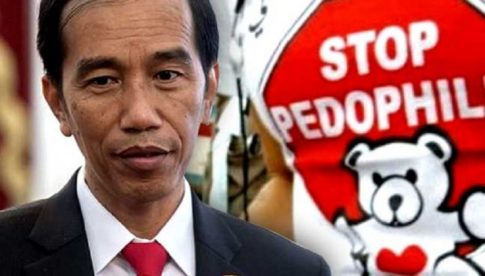 – Pedophiles in Indonesia Will Now Be Punished With Castration or Death:

Effective immediately, child rapists in Indonesia may be punished with chemical castration and/or the death sentence.

Last week, news surfaced of SC Johnson billionaire Samuel Curtis receiving a four-month prison sentence for sexually abusing his 12-year-old stepdaughter for three years. Understandably, activists were upset by the news, especially since the lenient sentence was a result of his affluent ties.

If Johnson had received the punishment reserved for child rapists in Indonesia, however, the world would have likely been too happy with with the reprimand received for his heinous crime.

As it is, only Indonesia seems to have a real understanding of the trauma inflicted upon young children when they’re sexually abused – or an awe-inspiring sense of justice. This was made clear when the president of Indonesia decreed a new law which punishes child sex abusers with chemical castration and/or death.

The law came to be after a 14-year-old girl was brutally raped by a gang and found murdered in a forest on the island of Sumatra. When the victim was discovered, she was naked and tied up. Seven teenagers have since been jailed for 10 years.

It is because President Joko Widodo does not think lightly of sexually abusing a child that he signed the serious punishment into law. He told journalists:

“Sexual violence against children, as I have said, is an extraordinary crime. We hope that this law will be a deterrent for offenders and can suppress sexual crimes against children.”

“These crimes have undermined the development of children, and these crimes have disturbed our sense of peace, security and public order. So, we will handle it in an extraordinary way,” he added.

The punishment of castration will be reserved for repeat child offenders, while the death penalty will be the ultimate reprimand to those whose victims have died or suffered severe mental or physical damage.

Chemical castration entails the offender consuming a cocktail of drugs which reduces their libido and, in effect, sexual activity. At present, it is a legal form of punishment in South Korea, Poland, and the Czech Republic, as well in some U.S. and Australian states. Offenders on parole could also be forced to wear ankle monitors so that their movements can be traced by authorities.

CNN reports that the law is effective immediately, though the country’s parliament has the power to overturn it or demand revisions.

Sexual violence against children has increased considerably in recent years, says President Joko, which is why serious measures are being employed to deter criminals from taking advantage of children. Authorities also hope that the new law satiates the country’s cry for harsher punishment to be taken against child rapists.