An interesting and typically protective concept. Good to see the Russians trusted the U.S. and NATO sensibly by preparing a fail safe.

Furthermore, in view of the continued stick poking policy the U.S. Exercising against Russia on behalf of the Neocon Zionists of israel, it would be stupid to think Vlad hasn’t updated the system to include those most likely protagonists as israel, I know I would.” 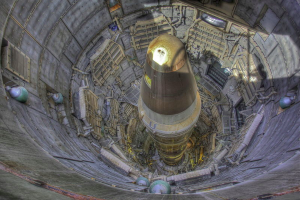 – The One Nuclear Threat That Most People Aren’t Aware Of:

These days we are all well aware that nuclear technology provides plenty of ways to disrupt our society. There are of course, an abundance of nuclear missiles in the world today, as well suitcase nukes and dirty bombs. There is also the ever looming possibility of a meltdown occurring in a nuclear power plant. However, there is one nuclear threat that very few people are aware of, and we have the Russians to thank for it.

In short, they have a bona fide doomsday machine. No, this isn’t science fiction. At first glance it probably doesn’t sound very exotic, since this machine delivers ordinary nuclear weapons. What’s so unique about it, is the conditions that could cause it to activate. The Russians refer to it as the “Dead Hand,” and it operates similarly to the fictional doomsday device from Dr. Strangelove.

Developed in the 1980’s, the Dead Hand is a system designed to ensure that no matter what happens during a nuclear attack, the Soviets would always be able to strike back. They feared that the United States would be able to decapitate their leadership with a preemptive nuclear strike, so they built an automated nuclear command system that requires very little human input.

The Dead Hand is a computer system that is connected to a network of seismic, radiological, and air pressure sensors distributed throughout the country, as well as the government’s communication infrastructure. If the Dead Hand detects a nuclear blast on Russian soil, then it will check to see if communications are still open with the upper echelons of the Russian government. If that connection is ever severed, (say by a nuclear attack against the Kremlin) the computer will initiate the launch of every remaining nuclear missile in Russia’s arsenal.

What’s so scary about this system, is that it has little human input. In any nuclear arsenal, there are typically multiple layers of politicians and military officials that a launch order has to pass through. If the Dead Hand however, decides that it’s time to launch a nuclear assault against the US, then that authority is passed to a handful of midranking officers hunkered down in a bunker. It’s widely believed that this system is still in operation to this day, and believe it or not, many of our government’s leaders are unaware of its existence.

The technical name was Perimeter, but some called it Mertvaya Ruka, or Dead Hand. It was built 25 years ago and remained a closely guarded secret. With the demise of the USSR, word of the system did leak out, but few people seemed to notice. In fact, though Yarynich and a former Minuteman launch officer named Bruce Blair have been writing about Perimeter since 1993 in numerous books and newspaper articles, its existence has not penetrated the public mind or the corridors of power. The Russians still won’t discuss it, and Americans at the highest levels—including former top officials at the State Department and White House—say they’ve never heard of it. When I recently told former CIA director James Woolsey that the USSR had built a doomsday device, his eyes grew cold. “I hope to God the Soviets were more sensible than that.” They weren’t.

That secrecy should be alarming, because we don’t have a very good idea about what could trip up this aging system. The very existence of the human race is in the hands of a 31-year-old computer and a few Russian officers, and that leaves a lot of scary questions unanswered.

Is this aging computer system still reliable? How about the sensors that its connected to? Can the select few people who man it be trusted to make the right decisions? Under the right conditions, could the Dead Hand initiate an accidental nuclear strike?

If say a dirty bomb temporarily severed communications with the Dead Hand, would it know what really happened? Or would it just sense the radiation and assume the worst? What about an asteroid, or a solar flare? We don’t know if all the sensors need to be giving readings that are consistent with a nuclear attack, or if they only need to identify a handful of conditions. We don’t know if the officers who check on the system are going to simply follow the computer’s instructions, or if they will rely on their own judgement.

There’s a lot of scary stuff that we don’t know about the Dead Hand. It just goes to show even though humans are far too scared and reasonable to launch a nuclear attack against another nuclear armed nation, the possibility of such a conflict happening accidentally is always present.