From the very beginning of Vancouver’s housing boom episode courtesy of an invasion of shady Chinese hot-money laundering home buyers, which has now officially driven the average list price of Vancouver single homes above $4 million…

For the first time ever, the average list price of a single family house in the City of Vancouver is now over $4,000,000.

… we have wondered how long before the Chinese government and financial institutions, if not Canada’s local authorities which apparently have no problem with a soaring housing bubble in their midst, finally crack down on these flagrant violators of China’s capital controls, whose children have been so openly flaunting their parent’s illicit wealth as reported in “My Daddy’s Rich And My Lamborghini’s Good-Looking”: Meet The Rich Chinese Kids Of Vancouver.”

We now have the answer.

According to the Globe and Mail, China CITIC Bank has filed a lawsuit in Canada to try to seize the assets of a Chinese citizen the bank claims took out a $10 million loan in China then fled to Canada.

In a first of its kind attempt at intercontinental repossession, the bank is looking to seize numerous Vancouver-area homes, valued at at least $7.3-million, along with other assets, according to the lawsuit, which was filed in the Supreme Court of British Columbia in Vancouver on Friday. 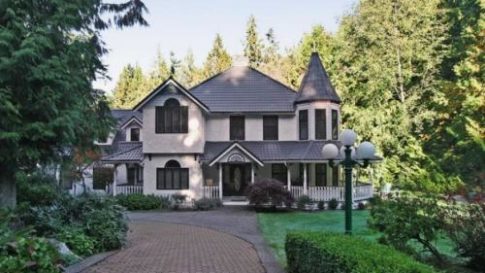 This $3.5 million home in Surrey B.C. is one of four homes a Chinese bank
claims are owned by a fugitive who defaulted on a $10 million loan.

The defendant, Shibiao Yan, owns three multimillion-dollar properties in a Vancouver suburb and lives in a $3-million Vancouver home owned by his wife, according to court documents, the Globe and Mail reports.

China has been in the midst of a major corruption crackdown and has stepped up efforts to find fugitives it says are hiding stolen assets abroad. In which case it will have lots of fruitful leads in Vancouver where virtually all real-estate purchases over the past year by Chinese “figutivies.” The lawsuit comes amid a debate about the role foreign money, particularly from China, has played in Vancouver’s property boom.

“The person involved left China with a large debt owed,” said Christine Duhaime, a lawyer who represents China CITIC Bank in the case, adding that she was not aware of any criminal charges against the man. Yan has not yet filed a response to the lawsuit and the claims have not been proven in court. We doubt he will appear.

Duhaime  would not comment on the proceedings, but tweeted that the case was of “global significance for China”. The reason is clear: it sets a precedent for many future such lawsuits, and confiscations.

As CBC adds, last week, Justice Gregory Bowden issued a temporary Mareva injunction against Yan, freezing his assets as the bank tries to make good on an arbitration ruling it claims to have obtained in March, ordering Yan to pay RMB 50 million plus RMB 2 million interest. According to the court documents, Yan incorporated a company in B.C. called TYMY Investments in March 2014, and his 36-year-old wife paid $2.5 million for a house in Vancouver a month later.

China has been working with Canada for years to finalize a deal on the return of ill-gotten assets seized from those suspected of economic crimes. The agreement was originally announced in July 2013 and has not yet been ratified.

But, as G&M notes, it is rare for Chinese banks to use Canadian courts to pursue those who have left the country. Chinese Foreign Ministry spokesman Hong Lei said the bank was protecting its rights in accordance with the law.

“This is a normal thing to do internationally,” Hong told reporters in Beijing.

According to the lawsuit, China CITIC Bank is seeking repayment for a line of credit worth 50 million yuan, or roughly $7.5-million, taken out by a Chinese lumber company and personally guaranteed by Yan, who was the company’s majority shareholder at the time.

Just like this website, Vancouver residents have questioned the legitimacy of foreign funds invested in the city’s real estate market and have urged authorities to do more to scrutinize their origin.

So far Vancouver authorities have done a terrible job of responding to these requests, and as a result housing prices in the west coast city have jumped 30 per cent in the last year, in the process pricing out virtually all local buyers, especially since in recent weeks local banks have clamped down on the issuance of mortgages for the luxury sectory, well aware that the bubble is about to burst.

And since Canada would do nothing to hinder the parking of hot Chinese money locally, China decided to take matters into its own hands. If successful, and it will be as we doubt Mr. Yan will dare to appear in court resulting in a prompt confiscation of his assets, the action will have a chilling effect on all future purchases, and will most likely lead to a selling avalanche as the Chinese elite in Vancouver scramble to offload its domestic assets and find a new safe haven where it can park its money for the next few years.

In other words, with CITIC’s lawsuit, the beginning of the end of Vancouver’s housing bubble has officially begun.