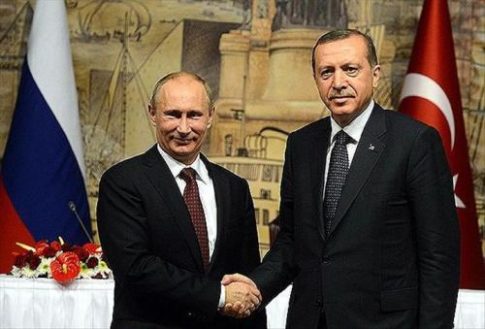 In two stunning geopolitical developments over the past 24 hours, Turkey – which is finding itself increasingly snubbed by not only Europe but also the US – has pivoted dramatically and shortly after restoring full deplomatic ties with another country that has recently seen the cold shoulder from the Obama administration, namely Israel, moments ago apologized to Russia for last year’s downing of a Russian jet which allegedly crossed above its territory as part of the Russian campaign against ISIS.

As RT reports, Vladimir Putin has received a letter in which Turkish President Recep Tayyip Erdogan apologized for the death of the Russian pilot who was killed when a Russian jet was downed over the Syrian-Turkish border last November, the Kremlin said. Erdogan expressed readiness to restore relations with Moscow, Kremlin spokesman Dmitry Peskov said on Monday.

“The head of the Turkish state expressed his deep sympathy and condolences to the relatives of the deceased Russian pilot and said ‘sorry,’” Peskov said.

In his letter, Erdogan called Russia “a friend and a strategic partner” of Ankara, with whom the Turkish authorities would not want to spoil relations.

“We never had a desire or a deliberate intention to down an aircraft belonging to Russia,” the letter read, according to a statement published on the Kremlin website. According to the statement, Erdogan’s letter stressed that “the Turkish side undertook all the risks and made a great effort to recover the body of the Russian pilot from the Syrian opposition, bringing it to Turkey. The organization of the pre-burial procedures was conducted in accordance with all religious and military procedures.”

Erdogan said that Turkey “shares the pain of downed Su-24 pilot’s death with his family” and “sees it as Turkey’s pain”, according to Peskov. Ankara said it treated the family of the dead Russian pilot as if it were a Turkish family and is “ready for any initiatives to relieve the pain and severity of the damage done,” the letter said.

The address by the Turkish leader also informed that a criminal investigation has been launched against the person suspected of killing the Russian pilot, Alparslan Celik, the Kremlin said. In addition, Erdogan expressed readiness to tackle security challenges in the region and fight terrorism together with Moscow, it added.

This takes place just hours after Turkey and Israel agreed to restore full diplomatic ties after more than six years of animosity, clearing the way for renewed cooperation between the U.S. allies and an easing of Israel’s blockade of the Hamas-ruled Gaza Strip. As the WSJ reported overnight, officials from both countries said late Sunday that negotiators in Rome had reached a deal that will be made public in Jerusalem and Ankara on Monday. Israeli Prime Minister Benjamin Netanyahu was in Rome to meet with Secretary of State John Kerry and discuss the agreement.

Relations collapsed in 2010 after nine Turkish citizens and a Turkish-American were fatally wounded—including one who died years later— during an Israeli commando raid on a Turkish ship carrying activists trying to break the blockade and enter Gaza by sea.

At a briefing in Rome on Monday morning with Mr. Kerry, ?the Israeli leader called it an important step toward normalizing relations that would have?”immense implications” for Israel’s economy. He didn’t provide further details but was scheduled to speak at a news conference later in the day.

“It’s a positive step we wanted,” Mr. Kerry said. “We hope it’s the beginning of others.”

The push toward rapprochement came amid security threats to both nations—the Syrian conflict on their borders, the rise of the extremist group Islamic State and what many regional governments view as Iran’s assertive military and political posture.

The deal won’t end the tight controls Israel imposed on Gaza’s borders in 2007 to hold Hamas militarily in check—a concession Turkey had demanded. But, in a compromise that broke a deadlock after months of talks, Turkey will be allowed to send aid to Gaza through the Israeli port of Ashdod and to build a 200-bed hospital, new power plants, residential buildings and other badly needed infrastructure in the war-torn Palestinian enclave.

Israel will also make it possible for Turkey to launch major development projects in the West Bank, a Palestinian territory whose borders are also controlled by Israel, a senior Turkish official said.

“There are absolutely no references to Hamas in the agreement. Turkey will continue supporting the Palestinian state and the people of Palestine… We are pleased to announce that representatives of the Palestinian government and Hamas have voiced their support to Turkey within the context of the negotiations,” the Turkish official said early Monday.

Just as importantly, the two countries will rebuild military and intelligence ties, which grew close in the 1990s and early 2000s, an Israeli official said. They will send ambassadors back to each other’s capitals.

Under the agreement, Israel will set up a $20 million fund to compensate families of those killed and wounded in the 2010 raid, the Israeli official said, and Turkey will ensure that Israeli officials are shielded from prosecution over the incident.

But the real news here is the formation of a new middle-eastern Axis, one which will include not only Turkey, which in recent months has pivoted toward restoring relations with Saudi Arabia and Qatar, but now includes Israel and most importantly Russia. This will have huge geopolitical implications for not just regional military developments but also for Russian oil transit plans, as the restoration of diplomatic relations with Turkey may mean that the Turkish stream pipeline is once again back online.