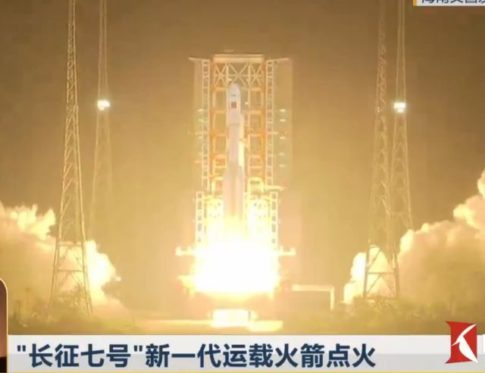 China’s developing space program took another major step forward on Saturday with the launch of its Long March 7 rocket, a new class of booster capable of lifting up to 13.5 metric tons to low-Earth orbit (LEO). The primary payload of the flight was a dummy version of its next-generation crew capsule and some CubeSats.

The launch highlighted several key advances for the rapidly modernizing Chinese rocket program. It marked the first launch from the Wenchang Satellite Launch Center, located on Hainan Island, the country’s southernmost point. This allows better access to geostationary orbit for Chinese satellites. The Long March 7 also operates with kerosene and liquid oxygen fuels, rather than more environmentally dangerous hypergolic fuels used to power earlier launchers that were based on 1970s technology.

The new 53-meter Long March 7 rocket is the medium-class version of a new launch family that will also include Long March 5, a heavy lift launch system comparable to the Delta IV Heavy rocket, and Long March 6, a rocket that will launch small satellites into space. Developed by the China Academy of Launch Vehicle Technology, the new fleet of vehicles will allow China to build and service a new space station, which may debut as early as 2022. The rocket launched Saturday is expected to deliver cargo resupply vehicles to China’s space station.

The Long March 5 rocket’s core stage is powered by two YF-100 engines, which China has been developing for more than a decade. The engine has a thrust of about 270,000 pounds at sea level, which is less than one of the space shuttle’s main engines (418,000 lbf), but more than one of the Merlin 1D engines (190,000 lbf) used by SpaceX in its Falcon 9 rocket.