– Hillary’s Official Calendar Is “Missing” A Lot Of Entries:

Little by little the public is starting to learn more about Hillary Clinton’s time as US Secretary of State, beyond the official narrative . Most recently it was revealed that the State Department disabled its own security software to accommodate emails being sent from Hillary’s private server, and also that Clinton omitted a key email discussing that very topic when turning over records to the State Department.

And now, courtesy of the AP, we learn that the official calendar that Hillary kept as secretary of state did not closely mirror the more detailed records of Clinton’s daily meetings provided by her aides. The detailed schedules were included in files the State Department turned over to the AP after it sued the government in federal court. 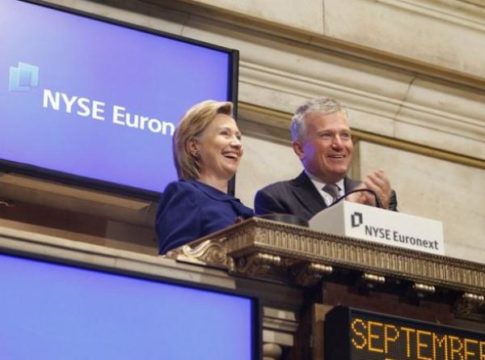 When the AP compared Clinton’s 1,500 page official calendar with the detailed planning schedules, what the AP found was stunning. The names of at least 114 outsiders who met with Clinton were missing from her calendar, and at least 75 meetings with longtime political donors, Clinton Foundation contributors and corporate and other outside interests were not recorded or omitted from the official calendar.

Additionally, more than 60 other events listed on the detailed planners were omitted entirely from Clinton’s calendar, noted as “private meetings”, none of which named names of anyone who Clinton met with.

For example, in an entry on Clinton’s schedule in September 2009 didn’t contain the identities of major Wall Street and business leaders who met with Clinton for a private breakfast discussion at the New York Stock Exchange. The meeting occurred minutes before Clinton appeared in public at the exchange to ring the opening bell. However, the detailed planning schedules from the same day listed all of the names that were omitted from the official schedule.

Despite the omission, Clinton’s State Department planning schedules from the same day listed the names of all Clinton’s breakfast guests — most of whose firms had lobbied the government and donated to her family’s global charity. The event was closed to the press and merited only a brief mention in her calendar, which omitted all her guests’ names — among them Blackstone Group Chairman Steven Schwarzman, PepsiCo CEO Indra Nooyi and then-New York Bank of Mellon CEO Robert Kelly.

Four of the attendees — Schwarzman, Nooyi, Cote and Kullman — headed companies that later donated to Clinton’s pet diplomatic project of that period, the U.S. pavilion at the 2010 Shanghai Expo.

All the firms represented except Coach lobbied the government in 2009; Blackstone, Honeywell, Omnicom and DuPont lobbied the State Department that year. Schwarzman and Frankfort have personally donated to the Clinton Foundation, and the other firms — except for American Tower and New York Bank of Mellon — also contributed to the Clinton charity.

The lengths that AP had to go to in order to obtain these documents were significant, and no documents showed who specifically logged entries in Clinton’s calendar or edited material. Once again, we find deputy chief of staff Huma Abedin’s name in the mix, as Abedin held weekly meetings and emailed almost every day about Clinton’s plans. Also, a stunning finding was made in that Clinton’s official calendar was edited after each event.

The AP first sought Clinton’s calendar and schedules from the State Department in August 2013, but the agency would not acknowledge even that it had the material. After nearly two years of delay, the AP sued the State Department in March 2015. The department agreed in a court filing last August to turn over Clinton’s calendar, and provided the documents in November. After noticing discrepancies between Clinton’s calendar and some schedules, the AP pressed in court for all of Clinton’s planning material. The U.S. has released about one-third of those planners to the AP, so far.

The documents obtained by the AP do not show who specifically logged entries in Clinton’s calendar or who edited the material. Clinton’s emails and other records show that she and two close aides, deputy chief of staff Huma Abedin and scheduling assistant Lona J. Valmoro, held weekly meetings and emailed almost every day about Clinton’s plans. According to the recent inspector general’s audit and a court declaration made last December by the State Department’s acting executive secretary, Clinton’s aides had access to her calendar through a government Microsoft Outlook account. Both Abedin and Valmoro were political appointees at the State Department and are now aides in her presidential campaign.

Unlike Clinton’s planning schedules, which were sent to Clinton each morning, her calendar was edited after each event, the AP’s review showed. Some calendar entries were accompanied by Valmoro emails — indicating she may have added those entries. Every meeting entry also included both the planned time of the event and the actual time — showing that Clinton’s calendar was being used to document each meeting after it ended.

The State Department said Friday that “extensive records” from Clinton’s calendars were preserved. Spokesman John Kirby said he couldn’t speak in more detail about practices during Clinton’s tenure because of the AP’s ongoing lawsuit.

Former department officials as well as government records experts said that secretaries of state have wide latitude in keeping their schedules, despite federal laws and agency rulings overseeing the archiving of calendars and warning against altering or deleting records.

“It’s clear that any outside influence needs to be clearly identified in some way to at least guarantee transparency. That didn’t happen. These discrepancies are striking because of her possible interest at the time in running for the presidency” said Danielle Brian, executive director of the Project on Government Oversight.

So we learn now that not only did Clinton omit key emails to the government, often times the official schedule omitted – if not outright “redacted” – key names and events as well while Clinton was the Secretary of State. Ironically, just as the case was with Abedin submitted an email that Hillary chose to keep from the government, the daily planning schedules from Hillary’s aides now shines a light on the detail Clinton tried to keep from the public record once again. We’re sure that’s just an oversight on Clinton’s part though, she was probably just too busy to make sure the official calendar accurately reflected what was taking place and who the US Secretary of State was meeting with.

Will anyone ask the question of what exactly was discussed when Hillary had these so called “private” meetings with Wall Street and big business? Probably not. However, for the sake of our readers and the so-called “posterity”, we have decided to document what the rest of the media will ignore, and we will not forget.