“Abenomics needs to be reloaded... The government can introduce a ‘comply or explain’ mechanism for profitable companies to ensure that they raise base wages by at least 3% and back this up by stronger tax incentives or — as a last resort — penalties,”

– The IMF Tells Japan: Abenomics Is A Miserable Failure, Recommends “Forcing Companies To Raise Wages.. Or Else!”:

For those confused as to whether or not Abenomics was working, all one has to do is glance at the recent export data released by the Ministry of Finance for confirmation that it’s been a complete disaster.

Japan’s exports fell 11.3% in May on a y/y basis, the eighth consecutive month that exports have fallen according to Bloomberg. Exports to the US fell 10.7% from a year earlier, and exports to China, Japan’s largest trading partner plummeted 14.9% y/y. 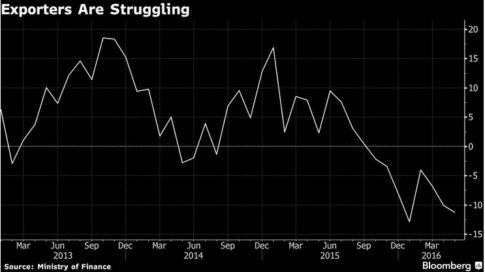 However, do not be alarmed, as the IMF is all over the matter. In a statement released on Monday, the IMF had a lot of sage advice to provide Prime Minister Abe about his Abenomics policies that have failed to produce literally any of the intended results.

As the Nikkei Asian Review summarizes, the IMF said that “Abenomics needs to be reloaded”, arguing that income policies and labor market reforms should be moved to the forefront. What stands out immediately here, is that the IMF is advocating a policy whereby companies are made to raise wages by at least 3%, and if they fail to do so, penalties are imposed. If central planning hadn’t jumped the shark a long time ago, we’d submit that this would be that point.

From the Nikkei Asian Review

Despite initial success, progress under Abenomics, Prime Minister Shinzo Abe’s trademark economic policies, has stalled in recent months. The inflation rate has dropped to negative territory again, while economic growth has remained anemic.The IMF now expects Japan’s economy to grow by about 0.5 percent in 2016, before slowing to 0.3 percent in 2017, with potential growth sliding to close to zero by 2030, due to the declining demographic.

“Abenomics needs to be reloaded,” the IMF said in its report and argued that income policies combined with labor market reforms should “move to the forefront” of the country’s fight against lagging growth.

“The government can introduce a ‘comply or explain’ mechanism for profitable companies to ensure that they raise base wages by at least 3% and back this up by stronger tax incentives or — as a last resort — penalties,” the IMF wrote. Promoting intermediate contracts that balance job security and wage increases will “reinforce income policies,” it added.

“Our perception is that much of the stasis of inflation [in Japan] comes from the legacy, the history of having negative inflation,” said David Lipton, first deputy managing director at the IMF, in a press conference in Tokyo. “Certainly firms have at this point the cash flow and resource at hand to provide some wage increases. There are wage increases evident in a wide range of companies across this economy, so our thought is to suggest that this be a broader practice and that it be more uniform.”

Upon learning of the news that Abe delayed Japan’s long awaited tax hike, we pointed out that it was an admission of failure for Abenomics, and Japan had no hope of ever reducing its debt load. The IMF is now pushing Japan to not only put the tax hikes back on the table, but incresae the percentage to “at least 15%.” as part of a “credible fiscal plan.” – good luck with all of that.

The fund noted that these reforms need to be backed up by measures to support demand as well as credible fiscal plans, and argued that the consumption tax hike to 10%, which the government delayed until October 2019, should be replaced by a gradual increase towards “at least 15%.”

“Starting the increases soon and replacing the currently planned 2019 hike with such a pre-announced, gradual path would enhance the credibility of the long-run fiscal adjustment, reduce uncertainty for consumers and avoid large intertemporal shifts in spending around the time of the tax hikes,” the IMF said.

The IMF even admits that NIRP has failed to generate any domestic demand at all, and is calling for the BOJ to scrap any expectation of inflation in order to be more realistic.

The Bank of Japan in February introduced a negative interest rate in part to support domestic demand. However, in the event that the IMF’s suggestions will not be implemented, Japan will lack growth and therefore would need a longer time to get its fiscal books in order. In that scenario, the IMF called on the bank to scrap its time frame for achieving its 2% inflation target, which the BOJ now sets at somewhere in fiscal 2017.

“The monetary policy framework would need to become more flexible, with the BOJ abandoning the use of a specific calendar date for achieving its inflation target,” the IMF said. “While such a shift should raise BOJ credibility by setting a more realistic goal, the transition will need to be well-communicated to avoid perceptions that the BOJ is reducing its commitment to achieving its inflation target and to limit the potential for adverse market reactions, including yen appreciation.”

So in summary, the IMF has studied Japan’s economy and has come to the conclusion that Abenomics has been a miserable failure. The advice now is to scrap all of the plans for hitting any kind of economic targets, and just start forcing companies to raise wages, while simultaneously raising everyone’s taxes 15%. The central planners are literally starting to lose their collective minds.