One month ago, Fred Ehrsam, co-founder of Coinbase in a sweeping, 2,500-word blog post, took aim at what he called a “stagnant” bitcoin community that he characterized as being outperformed by innovators working on the Ethereum network. In the post, Ehrsam sought to position Ethereum as a possible competitor to bitcoin, indicating his belief that the competing protocol could “blow past bitcoin entirely” (perhaps he was merely peeved at the lack of commission fees Coinbase was generating). In his post, Eshram said: “There is nothing that bitcoin can do which Ethereum can’t. While Ethereum is less battle tested, it is moving faster, has better leadership and has more developer mindshare. First mover advantage is challenging to overcome, but at current pace, it’s conceivable.”

Also, as Coindesk reported recently, those close to the project were beginning to see The DAO as Ethereum’s “flagship application”, one that they believe could hold the key to ensuring a lasting, favorable impression for Ethereum’s technology, or scar its reputation, with some comparing the DAO as the Ether

As of this morning, however, it is decidedly the latter, because it turns out there was something else that bitcoin’s biggest emerging competitor could do: get hacked.

As Cryptcoinnews reports, Ethereum co-founder Vitalik Buterin has asked digital currency exchanges to “pause” ether and activity on the decentralized autonomous organization, or DAO, activity following a hack of the DAO smart contract address. As a reminder Ethereum is the blockchain platform that enabled the DAO’s creation.

The DAO is currently being drained of ethers in a still-ongoing breach (as of this morning) to the unknown attacker’s ETH address. The ongoing hack and possible theft, deemed as an “attack” on the DAO by Vitalik Buterin, has the co-founder of Ethereum issue a plea seeking digital currency exchanges to pause ether (ETH) and DAO transactions.

In a post on the Ethereum subreddit, Buterin wrote:

Griff Green, spokesman for slockit, the creators of the Dao, stated on the DAO slack channel:

“The DAO is being attacked. It has been going on for 3-4 hours, it is draining ETH at a rapid rate. This is not a drill.

An interesting note from Etherium’s self-description:

Ethereum is a decentralized platform that runs smart contracts: applications that run exactly as programmed without any possibility of downtime, censorship, fraud or third party interference

That may need to be revised soon.

As a result, the price of Ethereum took a drastic dive this morning as news of the hack spread. Millions of ether are moving to an unkown address with some suggesting that it may be a recursive split hack. As shown in the chart below, the value of Ether has plummeted following the breach, losing over 20% of its value. 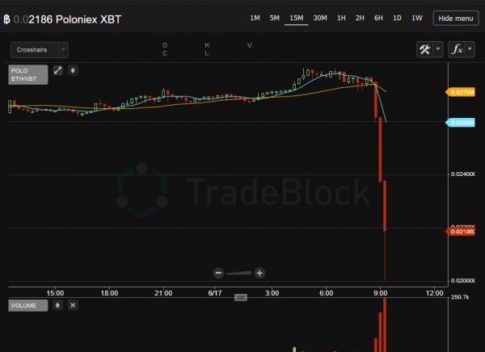 Ironically, Stephan Tual founder of Ethereum startup Slock.it which created the code on which The DAO is built told CoinDesk just a few days ago : “You don’t want a bad story about Ethereum. If [The DAO] were to crash, people would compare it to Mt Gox.”

That’s precisely what is about to happen.

As for bitcoin, it fell in earlier trading in sympathy with Etherium, tumbling 10% from multi year highs around $770 but has since promptly regained losses as BTC once again emerges as the frontrunning protocol.

Finally, all of this just goes to show that when it comes to “money”, whether digital, paper, or hard, there is simply no replacement to being able to hold it in one’s hand…