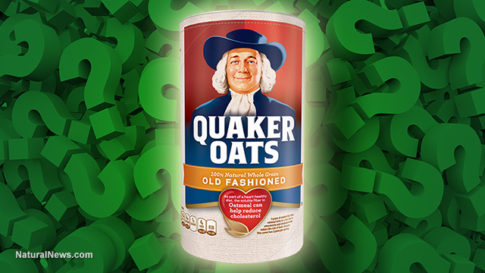 – Quaker Oats sued over glyphosate found in its ‘all natural’ oats… the truth is starting to come out about widespread glyphosate contamination of the food supply:

Quaker Oats, owned by PepsiCo, has been sued over its “all natural” oats containing high levels of glyphosate weed killer (sold as “Roundup” by Monsanto).

The New York Times, forever a defender of Monsanto and GMOs, is blatantly lying to its readers by claiming the glyphosate found in Quaker Oats is nothing more than “traces.” In reality, the glyphosate contamination of Quaker Oats was tested at alarming levels by a St. Louis laboratory using the ELISA technique.

Deadly glyphosate now being sprayed on oats, wheat, barley and other crops as a dessicant

Quaker Oats admits that its oats are sprayed with glyphosate by farmers. This fact is a total shock to most consumers who are completely unaware that glyphosate is now routinely sprayed on non-GMO crops. Via the NY Times:

In a statement, the Quaker Oats Company said that it did not add glyphosate during any part of the milling process but that it might be applied by farmers to certain grains before harvest… Oats are not a genetically engineered crop. But glyphosate is increasingly being used as a “dessicant” to dry out crops to speed harvesting.

The Quaker Oats company, apparently staffed by people who are scientifically illiterate, believes it can “wash off” the glyphosate even though it’s already soaked into the oats. As the NY Times continues:

The company said it puts the oats it receives through a cleansing process. “Any levels of glyphosate that may remain are trace amounts and significantly below any limits which have been set by the E.P.A. as safe for human consumption,” the company said.

But one thing I’ve come to learn as a food scientist — I’m the lab science director of CWC Labs and the author of Food Forensics — is that glyphosate survives food washing and food processing! That’s how it ends up fully intact in beer, cereals and other products.

“Glyphosate residues are neither removed by washing nor broken down by cooking. The herbicide residue remains on food for more than a year, even if processed, dried, or frozen.” – The Dirt Cure Growing Healthy Kids with Food Straight from Soil by Maya Shetreat Klein MD.

The NY Times goes on to report:

A test paid for by lawyers for the plaintiffs, the Richman Law Group, found glyphosate at a level of 1.18 parts per million in a sample of Quaker Oats Quick 1-Minute. This is roughly 4 percent of the 30 parts per million that the Environmental Protection Agency allows in cereal grains.

However, what the NY Times deliberately fails to report is that the EPA colludes with Monsanto to artificially raise contamination limits to outrageous levels as a way to protect the interests of industry.

Just as the EPA did with biosludge, it raises allowable glyphosate contamination limits to whatever numbers are desired by the biotech industry. The EPA is America’s most anti-science regulator, abandoning real science at every opportunity so that it can push a pro-industry agenda of the mass poisoning of the soils and crops. And the scientifically illiterate NY Times pretends that whatever level the EPA sets is rooted in the science of public safety. It isn’t. It’s actually rooted in protecting corporate interests while poisoning the entire food supply.

That’s exactly how glyphosate ends up in your Quaker Oats oatmeal, a product that used to be truly natural and safe to eat. Now, I wouldn’t touch Quaker Oats with a six-foot snake stick!

Check out this large collection of author quotes on glyphosate and cancer. Here’s just a small taste:

Following is a list of toxic effects caused by glyphosate, AMPA, and Roundup as revealed in animal studies, laboratory studies in human cells, and human epidemiological and clinical case studies: Severe liver and kidney damage + Chronic kidney disease; Disruption of hormonal systems which can potentially lead to multiple organ damage and hormone-dependent cancer; Developmental and reproductive toxicity, including damage to sperm and miscarriage and premature birth + Disruption of beneficial gut bacteria, favouring the growth of botulism-causing bacteria in cows; Damage to DNA; Birth defects; Neurotoxicity; Cancer.
– GMO Myths and Truths A Citizens Guide to the Evidence on Genetically Modified Crops by Claire Robinson Mphil and Michael Antoniou

Even at very low doses of exposure, glyphosate kills placental, embryonic, and umbilical cells. Glyphosate is associated with genetic damage (mutations), including chromosomal aberrations, even at doses below those recognized as “safe.” The herbicide acts as a potent endocrine disruptor, which can affect future reproductive health of young boys and girls. Glyphosate was even implicated recently in the development of autism, neurobehavioral problems in children, and other neurological diseases, including Parkinson’s and Alzheimer’s. Glyphosate – and other components inherent to using GMOs – are linked to conditions such as increased intestinal permeability (leaky gut), imbalanced gut bacteria, immune activation, food allergies, impaired digestion, and damage to the intestinal wall. Eating GMO crops impairs fertility in livestock. Above all, glyphosate impairs detoxification and was called out by the World Health Organization (WHO) as possibly causing cancer.
– The Dirt Cure Growing Healthy Kids with Food Straight from Soil by Maya Shetreat Klein MD

Glyphosate is toxic According to the Journal of Pesticide Reform, “Symptoms of exposure to glyphosate include eye irritation, burning eyes, blurred vision, skin rashes, burning or itchy skin, nausea, sore throat, asthma and difficulty breathing, headache, lethargy, nose bleeds, and dizziness. Glyphosate and glyphosate-containing herbicides caused genetic damage in laboratory tests with human cells, as well as in tests with laboratory animals. … Exposure is linked with increased risks of the cancer non-Hodgkin’s lymphoma, miscarriages, and attention deficit disorder, as well as Parkinson’s disease. Exposure to mouse testicular cells (Leydig cells) resulted in a 94% reduction in sex hormone production. In a study on human cells, a non-toxic concentration of Roundup as small as “100 times lower than the recommended use in agriculture, significantly disrupted the activity of aromatase – an enzyme crucial to sex hormone production.
– Genetic Roulette The Documented Health Risks of Genetically Engineered Foods by Jeffrey M Smith

Monsanto has convinced millions of farmers, the American government, and the European Commission that glyphosate is safe. Yet the picture is not so clear. Studies published in 2010 show glyphosate causes birth defects in frogs and chicken embryos at amounts smaller than farmers and gardeners leave in food. Older studies document other dreadful effects of glyphosate, including cancer, endocrine disruption, damage to DNA, and deleterious malformations of the reproductive, neurological, and developmental systems of animals and humans. Researchers also link glyphosate to miscarriages in humans and livestock. Monsanto and government authorities have known about the toxic effects of glyphosate since the 1980s. And both the industry and regulators have kept the public in the dark. Genetic engineering, in other words, represents imperial politics of the worst kind, aiming at no less than the control of the world’s food by agribusiness.
– Poison Spring The Secret History of Pollution and the EPA by E G Vallianatos and McKay Jenkins

A report commissioned by the provincial government of Chaco, Argentina, found that the rate of birth defects increased fourfold and rates of childhood cancers tripled in only a decade in areas where rice and GM soy crops are heavily sprayed with glyphosate and other herbicides. A review of studies on the health effects of pesticides used with GM herbicide-tolerant crops concluded that the precautionary principle was being flouted. Studies have linked an epidemic of chronic kidney disease in Sri Lanka and other countries to exposure to Roundup. The authors propose that glyphosate becomes toxic to the kidney when it mixes with “hard” water containing metals, or with heavy metals like arsenic and cadmium, where they are naturally present in soil or added as fertilizers. The authors argue that glyphosate binds to these substances and carries them to the kidneys, resulting in tissue destruction.
– GMO Myths and Truths A Citizens Guide to the Evidence on Genetically Modified Crops by Claire Robinson Mphil and Michael Antoniou