– California Fault Lines Are “Locked, Loaded, & Ready” For The Big One, Expert Warns:

Have you noticed that the crust of the Earth is starting to become a lot more unstable?

As The End of The American dream blog’s Michael Snyder explains, over the past couple of months, major earthquakes have shaken areas all over the planet and major volcanoes have been erupting with a frequency that is more than just a little bit startling.  Here in the United States, the state of Oklahoma absolutely shattered their yearly record for quakes last year, we just saw a very disturbing earthquake right along the New Madrid fault just recently, and as you will see below one scientist is telling us that the San Andreas fault in southern California “looks like it’s locked, loaded and ready to go”. 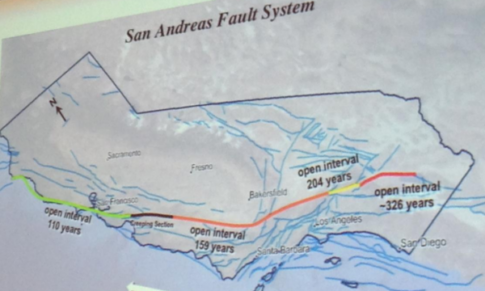 The name of the scientist that issued that very ominous warning is Thomas Jordan, and he is the director of the Southern California Earthquake Center.  The following quote from Jordan comes from a Los Angeles Times article that was published this week that is getting a huge amount of attention right now…

“The springs on the San Andreas system have been wound very, very tight. And the southern San Andreas fault, in particular, looks like it’s locked, loaded and ready to go,” Jordan said in the opening keynote talk.

Other sections of the San Andreas fault also are far overdue for a big quake. Further southeast of the Cajon Pass, such as in San Bernardino County, the fault has not moved substantially since an earthquake in 1812, and further southeast toward the Salton Sea, it has been relatively quiet since about 1680 to 1690.

Here’s the problem: Scientists have observed that based on the movement of tectonic plates, with the Pacific plate moving northwest of the North American plate, earthquakes should be relieving about 16 feet of accumulated plate movement every 100 years. Yet the San Andreas has not relieved stress that has been building up for more than a century.

Jordan went on to say that when the tension that has been building along the San Andreas fault is finally relieved, it could potentially produce a magnitude 8 earthquake. What a Magnitude 8 quake would look like…

Back in 2008, the U.S. Geological Survey concluded that just a magnitude 7.8 earthquake along the southern San Andreas fault would cause more than 1,800 deaths, 50,000 injuries and 200 billion dollars in damage.

So we are talking about a truly historic event.

Many people out there believe that someday large portions of California will fall into the ocean as the result of an absolutely massive earthquake, but the USGS is convinced that is not likely to happen.  However, they do openly admit that someday the cities of Los Angeles and San Francisco will be located right next to one another…

Will California eventually fall into the ocean?

No. The San Andreas Fault System, which crosses California from the Salton Sea in the south to Cape Mendocino in the north, is the boundary between the Pacific Plate and North American Plate. The Pacific Plate is moving northwest with respect to the North American Plate at approximately 46 millimeters per year (the rate your fingernails grow). The strike-slip earthquakes on the San Andreas Fault are a result of this plate motion. The plates are moving horizontally past one another, so California is not going to fall into the ocean.

However, Los Angeles and San Francisco will one day be adjacent to one another!

But of course it isn’t just California that we need to be concerned about.

According to the Daily Mail, one team of scientists has concluded that giant chunks of the Earth’s mantle are “breaking off and sinking into the planet” under the North American plate, and that this is what has caused some of the unusual earthquakes in the eastern part of the country in recent years…

The southeastern United States has been hit by a series of strange unexplained quakes – most recently, the 2011 magnitude-5.8 earthquake near Mineral, Virginia that shook the nation’s capital.

Researchers have been baffled, believing the areas should be relatively quiet in terms of seismic activity, as it is located in the interior of the North American Plate, far away from plate boundaries where earthquakes usually occur.

Now, they believe the quakes could be caused by pieces of the Earth’s mantle breaking off and sinking into the planet.

I don’t know about you, but that sounds rather ominous to me. 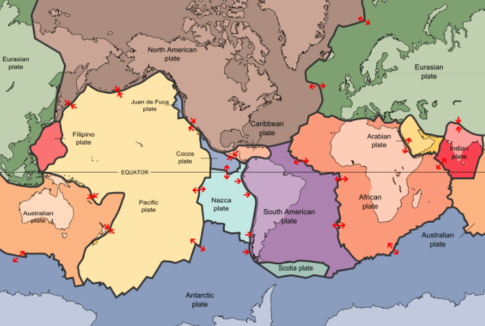 The crust of our planet already somewhat resembles a giant cracked egg, and to hear that pieces may be breaking off and sinking into the interior is not exactly comforting.

The study authors conclude this process is ongoing and likely to produce more earthquakes in the future.

‘Our idea supports the view that this seismicity will continue due to unbalanced stresses in the plate,’ said Berk Biryol, a seismologist at the University of North Carolina at Chapel Hill and lead author of the new study.

‘The [seismic] zones that are active will continue to be active for some time.’

Those that follow my work closely know that I have been writing about seismic activity a lot lately, and that I believe that major earth changes are coming to the North American continent.  I am deeply concerned about the New Madrid fault, the Cascadia Subduction zone, the major faults in southern California and Mt. Rainier up in Washington state.

In the end, I don’t believe that we will see just one or two major seismic events in the years ahead.

For those of us that are fortunate enough to live long enough, I believe that all of those areas that I just mentioned will experience major events.