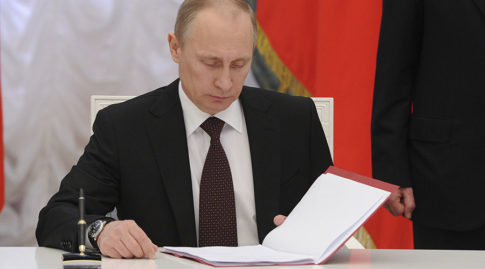 The Russian president has signed into law a bill that allows the Lower House to oust its members for systematically failing to appear at the sessions or committee meetings.

The exact formula used in the act reads that from now on State Duma deputies can lose their positions for at least 30 days of leave without a valid excuse, both from State Duma sessions and from the gatherings of parliamentary committees which the lawmakers are members of.

The list of legitimate reasons for failing to attend includes standard ones such as holiday, illness or death of relatives, and more specific ones such as “carrying out the work of the Russian Duma,” and various insurmountable circumstances, such as delayed flights, traffic jams and home emergencies.

Depriving ill-disciplined MPs of their mandates is conducted by a simple State Duma vote initiated by a parliamentary committee that the MP in question belongs to. Also, the move has to win approval from the Lower House’s commission for ethics.

The bill in question was submitted by the center-left opposition party Fair Russia in July 2015 and was passed by the parliament in late April.

One of the main sponsors of the motion, Fair Russia MP Oleg Nilov, told Izvestia daily that its introduction was very timely, as it was important “to purge all shirkers and loafers from the parliamentary halls and set an example for everyone so that those who take part in the elections would not even thing about copying such behavior.”

The problem of absenteeism in the Lower House was first raised in 2010 by then-president Dmitry Medvedev. “I am very surprised to see only 10 to 15 per cent of our elected officials present during sessions. They should attend. If they like to go walkabout, we should find them a new place to go walkabout from,” Medvedev told lawmakers pointing at rows of empty seats in parliament. The State Duma promised to rectify the situation.

The fact that the bill had been prepared and drafted by the Fair Russia faction could be explained by this party’s longstanding conflict with State Duma deputy Ilya Ponomaryov, who was stripped of his parliamentary immunity in 2015 over suspected graft and misuse of state funds, but continues to formally occupy his seat, even though he now resides in the United States and has not performed his parliamentary work since mid-2014.

The Russian Prosecutor General’s Office charged Ponomaryov in absentia with complicity in the 2013 scandal at the Skolkovo Foundation, the state-sponsored center for innovation and technology. Back then, Russian investigators discovered that Skolkovo Vice-President Aleksey Beltyukov had paid Ponomaryov about $750,000 for 10 lectures and one research paper. The probe and subsequent court hearings proved these allegations to be true. Beltyukov was suspended and a criminal investigation into his case is ongoing. Ponomaryov was not prosecuted because of his parliamentary immunity, but the court ordered him to return the money.