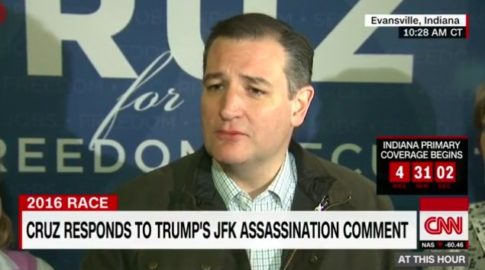 He went on to accuse Mr. Trump of bragging about infidelity, lacking in morals, harboring negative sentiments towards women in public life and being a bigger narcissist that President Barack Obama.

“Donald Trump is such a narcissist that Barack Obama looks at him and says, ‘Dude, what’s your problem?'” Cruz said. “The man is utterlly amoral,” he added.

“Donald is cynically exploiting that anger and Donald is lying to his supporters,” he continued. He went on to insist Trump would betray his supporters by not doing what he promises, including on building a wall on the Mexican border.

Cruz also slammed Trump for going after his wife, and saying she wasn’t good-looking enough for him. “Donald has a real problem with women,” said Cruz, accusing the frontrunner of being “terrified” of strong women.

He dug into Trump’s past as a Manhattan playboy, savaging Trump for bragging about his infidelities. “Donald Trump is a serial philanderer and he boasts about it,” Cruz said. “This is not a secret, he’s proud of being a serial philander. I want everyone to think about your teenage kids. The president of the United States talks about how great it is to commit adultery. How proud he is, describes his battle with venereal disease as his own personal Vietnam. That’s a quote from the Howard Stern show. Do you want to spend the next five years with your kids bragging about infidelity?”

Cruz’s surprising blow up came the same day that Trump made a likewise strange media statement when he went on Fox News and suggested that Mr. Cruz’s father Rafael Cruz was involved in the assassination of President John F. Kennedy in 1963. Mr. Trump offered little evidence for his assertions. The National Enquirer supermarket tabloid published a story last month alleging a photograph showed Mr. Cruz’s father in a photograph with assassin Lee Harvey Oswald.

“His father was with Lee Harvey Oswald prior to Oswald’s being shot. I mean, the whole thing is ridiculous,” Mr. Trump told Fox. “What is this, right prior to his being shot, and nobody even brings it up. They don’t even talk about that. That was reported, and nobody talks about it.”

It did not end there. Cruz continued: “Let’s be clear: this is nuts. This is not a reasonable position. This is just kooky. And while I’m at it, I guess I should go ahead and admit that my dad killed JFK, he is secretly Elvis and Jimmy Hoffa is buried in his backyard.”

As the WSJ adds, a Trump victory in Indiana would put the New York businessman on track to clinching the Republican nomination by the end of the primaries in June. A Cruz victory in the state, however, would significantly increase the chances of a contested July Republican convention.

Aside from his outburst, Cruz pled with voters in Indiana, where over the past month he has squandered his substantial lead: “the entire country is looking to you right now. It is only Indiana that can pull us back. It is only the good sense and good judgment of Indiana that can pull us back. We are staring at the abyss. And I have incredible faith.”

Cruz said Murdoch has a history of “picking world leaders” abroad but said he’s never before asserted that kind of influence in the U.S.

That was an impressive meltdown… Desperate but impressive. Reminded me of my 3 year old coming off a sugar high. https://t.co/3lqwHIRWo6

In a few hours we will learn if Cruz’s outburst has generated any sympathy points for the candidate who was lagging badly behind Trump in the latest Indiana polls.

Cruz’ entire rant is on the clip below.