What until now was mostly effete jawboning over US complaints surrounding China’s territorial expansion ambitions in the South China Sea, including the occasional sailing of a US ship deep inside the disputed territorial waters (with zero impact especially now that China may soon start building maritime nuclear power plants in the area), changed dramatically earlier today when China officially denied a U.S. carrier strike group’s request for a port visit to Hong Kong next week. 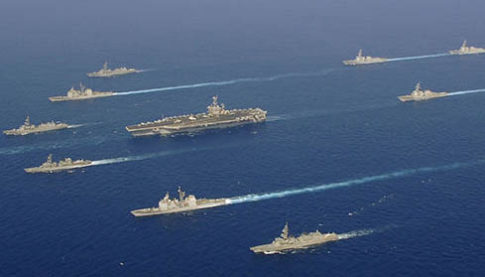 As Stripes writes, the Chinese Ministry of Foreign Affairs notified the United States Thursday of its decision to deny the USS John C. Stennis and its escort ships access to the former British colony, Darragh Paradiso, a spokeswoman for the U.S. Consulate General in Hong Kong, said by phone. The ministry provided no explanation for the move.

While U.S. warships frequently visit Hong Kong, port calls have been canceled at times of diplomatic strain between the two Asia-Pacific powers. In 2007, China denied access to the city’s port by the aircraft carrier USS Kitty Hawk.

The decision follows weeks of increasing diplomatic sparring between China and the U.S. over Beijing’s claims to more than 80 percent of the South China Sea. The nuclear-powered Stennis has played a central role in U.S. efforts to demonstrate its continued security presence in the disputed waters, with Defense Secretary Ashton Carter visiting the warship on patrol there in April. 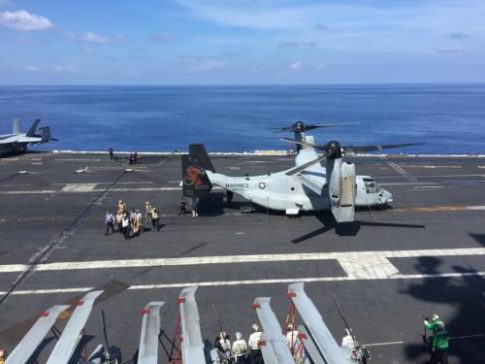 A plane carrying U.S. Secretary of Defense Ash Carter lands on the deck of the USS
John C. Stennis on April 15, 2016, as the ship sailed through the South China Sea.

According to Shi Yinhong, director of the Center on American Studies at Renmin University in Beijing, and a foreign policy adviser to the State Council, the Stennis has become a “symbol of efforts to spark strategic tensions between China and the United States. The cancellation is a snapshot of the current intensity in China-U.S. security relations. Without significant security need, routine port calls would not have been canceled.”

While the US has been complaining about China’s territorial expansions over the past year, culminating with the current recent incident, China’s claims to the South China Sea have resulted in numerous other disputes with other neighboring Southeast Asian nations that assert rights to the area, including Vietnam and the Philippines. Tensions are running high as the region braces for a ruling by an international arbitration panel on a Philippine challenge to China’s claims.

“We have a long track record of successful port visits to Hong Kong, including with the current visit of the USS Blue Ridge, and we expect that will continue,” Paradiso said, referencing the U.S. Navy command ship already moored in the city.

Finally, earlier today the US State Department confirmed that indeed China has refused to allow Stennis to dock in Hong Kong.