– John Boehner Calls Ted Cruz “A Miserable Son Of A Bitch, Lucifer In The Flesh”:

Is the establishment’s fervent hatred of Donald Trump starting a U-turn? It’s still too early to know, however at least one core Republican, former house speaker John Boehner, has made it very clear he is not a fan of Ted Cruz. At all. So much so that according to NBC the former Republican House Speaker told an audience at Stanford University Wednesday that the Texas senator is “Lucifer in the flesh” and a “miserable son of a bitch.“ 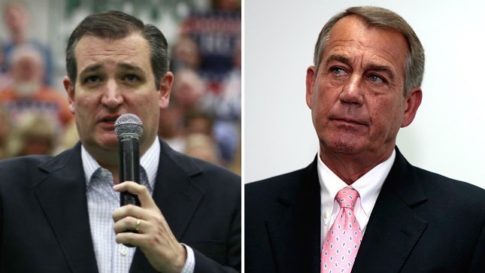 When asked about the 2016 presidential candidate at a forum hosted by Stanford in Government and the Stanford Speakers Bureau, Boehner drew laughter for making a face of disgust, according to the Stanford Daily.

“Lucifer in the flesh,” Boehner said cited by the paper. “I have Democrat friends and Republican friends. I get along with almost everyone, but I have never worked with a more miserable son of a bitch in my life.”

Boehner’s shocking statement came because he was urged by the event’s moderator, Professor David M. Kennedy, to be frank because the event was not being broadcasted. Perhaps Boehner did not realize people were still taking notes.

Curiously, and an indication that the GOP faithful may be turning in their support for Trump, the former Ohio lawmaker had kinder words for his “texting buddy” Donald Trump, with whom Boehner has played golf with for “years.”

And a surprising admission: Boehner said he’d vote for Donald Trump in the general election if he were the Republican nominee, but he would not vote for Ted Cruz.

Actually we take that back: the establishment is turning in their support of Trump.

Boehner also said John Kasich was a “friend” too, although he suggested that the relationship takes “more effort” than others. “[Kasich] requires more effort on my behalf than all my other friends … but he’s still my friend, and I love him,” Boehner said.

As the Hill reminds us, Cruz was a thorn in Boehner’s side during several standoffs with the Obama administration, and some of his actions likely cost Boehner support from his own conference. Cruz met with House members of the conservative Freedom Caucus — an unusual move for a freshman senator — in 2013 and pushed them to fight to defund ObamaCare. The effort eventually led to a government shutdown that hurt the GOP. Boehner reportedly called Cruz a “jackass” over the issue.

At Stanford, a Boehner unburdened by the shackles of the office reportedly garnered laughter and smiles from the attendees as he struck a more informal tone than in most of his past previous appearances.