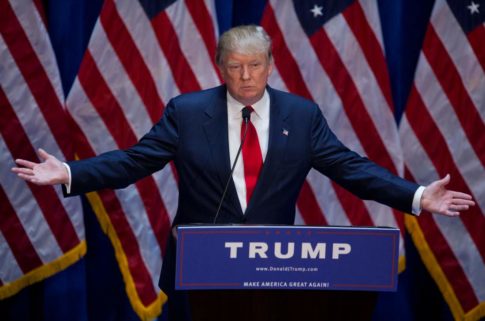 In what will be a closely watched and even more closely scrutinized speech, today at noon Donald J. Trump will hold a speech on foreign policy at the Mayflower Hotel in Washington, DC.  In the speech Trump is poised to demonstrate just how “presidential” he can be, because as Reuters writes, “he is expected to set aside his bad-boy antics and, with the help of a teleprompter to keep him on message, outline what his foreign policies would be if he is elected U.S. president.”

Reuters also adds that “governments alarmed at the prospect of a Trump presidency will be paying close attention.” The reason for their concern is Trump’s desire to make a U-turn on years of traditional US foreign policy, among which tone down the US role in NATO. “Many foreign policy and defense advisers say his views are worrying, mingling isolationism and protectionism, with calls to force U.S. allies to pay more for their defense and proposals to impose punitive tariffs on some imported goods.”

“Part of what I’m saying is we love our country and we love our allies, but our allies can no longer be taking advantage of this country,” Trump told reporters on Tuesday night in a speech preview.

Trump said he would focus on nuclear weapons as the single biggest threat in the world today. “I’m probably the last on the trigger,” Trump told ABC’s “Good Morning America” on Wednesday, citing his opposition to the Iraq war.

Trump, 69, said he agreed with President Barack Obama’s decision to send an additional 250 U.S. Special Forces into Syria but would not have made the decision public. “I would send them in quietly because right now they have a target on their back,” he told CNN. He also said his speech would focus on the economics of foreign policy “because we’re getting killed on economics.”

The billionaire businessman promises to temporarily ban Muslims from entering the United States and to build a wall to block off Mexico. His policies are popular with many voters who want change, but foreign policy elites are concerned.

“It’s a perfect storm of isolationism, muscular nationalism, with a dash of pragmatism and realism,” said Aaron David Miller, a foreign policy scholar who has worked in Republican and Democratic administrations.

The speech at a Washington hotel will address issues including global trade, economic and national security policies as well as building up the U.S. military, his campaign said.

Watch it live below at 12PM.