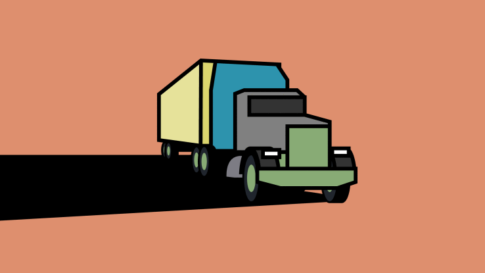 – The driverless truck is coming, and it’s going to automate millions of jobs:

A convoy of self-driving trucks recently drove across Europe and arrived at the Port of Rotterdam. No technology will automate away more jobs — or drive more economic efficiency — than the driverless truck.

Shipping a full truckload from L.A. to New York costs around $4,500 today, with labor representing 75 percent of that cost. But those labor savings aren’t the only gains to be had from the adoption of driverless trucks.

Where drivers are restricted by law from driving more than 11 hours per day without taking an 8-hour break, a driverless truck can drive nearly 24 hours per day. That means the technology would effectively double the output of the U.S. transportation network at 25 percent of the cost.

And the savings become even more significant when you account for fuel efficiency gains. The optimal cruising speed from a fuel efficiency standpoint is around 45 miles per hour, whereas truckers who are paid by the mile drive much faster. Further fuel efficiencies will be had as the self-driving fleets adopt platooning technologies, like those from Peloton Technology, allowing trucks to draft behind one another in highway trains.

Trucking represents a considerable portion of the cost of all the goods we buy, so consumers everywhere will experience this change as lower prices and higher standards of living.

While the efficiency gains are too real to pass up, the technology will have tremendous adverse effects as well.

In addition, once the technology is mature enough to be rolled out commercially, we will also enjoy considerable safety benefits. This year alone more people will be killed in traffic accidents involving trucks than in all domestic airline crashes in the last 45 years combined. At the same time, more truck drivers were killed on the job, 835, than workers in any other occupation in the U.S.

Even putting aside the direct safety risks, truck driving is a grueling job that young people don’t really want to do. The average age of a commercial driver is 55 (and rising every year), with projected driver shortages that will create yet more incentive to adopt driverless technology in the years to come.

While the efficiency gains are real — too real to pass up — the technology will have tremendous adverse effects as well. There are currently more than 1.6 million Americans working as truck drivers, making it the most common job in 29 states.

The loss of jobs representing 1 percent of the U.S. workforce will be a devastating blow to the economy. And the adverse consequences won’t end there. Gas stations, highway diners, rest stops, motels and other businesses catering to drivers will struggle to survive without them.

The demonstration in Europe shows that driverless trucking is right around the corner.  The primary remaining barriers are regulatory. We still need to create on- and off-ramps so human drivers can bring trucks to the freeways where highway autopilot can take over. We may also need dedicated lanes as slow-moving driverless trucks could be a hazard for drivers. These are big projects that can only be done with the active support of government. However, regulators will be understandably reluctant to allow technology with the potential to eliminate so many jobs.

Yet the benefits from adopting it will be so huge that we can’t simply outlaw it. A 400 percent price-performance improvement in ground transportation networks will represent an incredible boost to human well-being. Where would we be if we had banned mechanized agriculture on the grounds that most Americans worked in farming when tractors and harvesters were introduced in the early 20th century?

We often discuss the displacement of jobs by artificial intelligence and robots in the abstract, as something that we’ll have to eventually tackle in the far distant future. But the recent successful demonstration of the self-driving truck shows that we can’t afford to put off the conversation on how we’re going to adapt to this new reality.