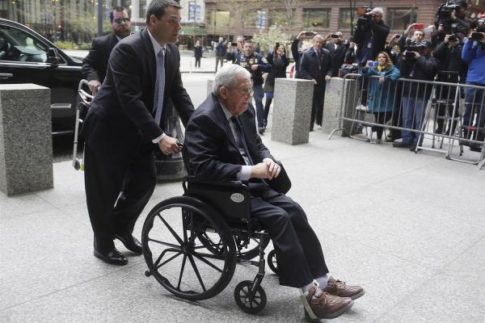 Moments ago, former House Speaker Dennis Hastert was sentenced to 15 months in prison in his hush-money case by a judge who called him a “serial child molester” and ordered him to enroll in a sex-offender treatment program.

As NBC reports, Hastert, 74, was accused of abusing four boys between the ages of 14 and 17 when he was a coach at Yorkville High School decades ago. While he was not charged with any sexual crimes because of the statute of limitations, but he pleaded guilty to making illegal cash withdrawals to pay off one of his accusers.

Hastert pleaded guilty to illegally structuring bank transactions between 2010 and 2014 to avoid having them reported to regulators. Prosecutors say he was using the money to pay off a man known only as Individual A, who says Hastert molested him on a wrestling camp trip. Individual A is not testifying at the hearing and sued Hastert this week to collect the remainder of the $3.5 million he says he was promised after he confronted Hastert.

The ex-politician, who arrived in a wheelchair, had no reaction as U.S. District Judge Thomas Durkin handed down the sentence, which includes a $250,000 fine and two years supervised release, in a Chicago courtroom.

Earlier, Hastert listened as one of his accusers broke a lifelong silence and testified about being molested in a locker room in 1979 and as the sister of another accuser demanded he “tell the truth.” Before he learned his fate, Hastert apologized “to the boys I mistreated when I was their coach” but pointedly did not use word abuse. “What I did was wrong and I regret it,” the onetime Republican power broker testified. “They looked up to me and I took advantage of them.”

One of the ex-students, Scott Cross, told the court that when he was a senior in high school in 1979, Hastert took off his shorts and sexually fondled him during a massage after a workout. “As a 17-year-old boy I was devastated. I tried to figure out why Coach Hastert had singled me out. I felt terribly alone,” Cross, who is called Individual D in court papers, testified. “Today I understand I did nothing to bring this on, but at age 17, I could not understand what happened or why.”

“I’ve always felt that what Coach Hastert had done to me was my darkest secret,” the father of two told the judge, adding that he was not sure until he took the stand that he could bring himself to talk about the incident.

“I wanted you to know the pain and suffering he caused me then and still causes me today. Most importantly, I want my children and anyone else who was ever treated the way I was that there is an alternative to staying in silence.

The sister of another accuser, who died of AIDS in 1995, took the stand to tell Hastert he stole her brother’s innocence.

“Don’t be a coward,” Jolene Burdge, sister of Steven Reinboldt, told him. “Tell the truth. You were supposed to keep him safe, not violate him,” she added. “I always wonder if you’re sorry for what you did or if you’re sorry you got caught.”

The answer should be obvious.

Asked by the judge if he had sexually abused Cross, Hastert said he did not remember doing it but would “accept his statement.”

He was more defensive about Burdge’s molestation claim. “It was a different situation, sir,” he said when the judge asked he had abused Reinboldt. When the judge pressed him, Hastert added, “I will accept Ms. Burdge’s statement.”

Hastert, who had a stroke several months ago, has cited his health problems as a reason he should be sentenced to probation. Prosecutors recommended a six-month sentence in accordance with the sentencing guidelines.