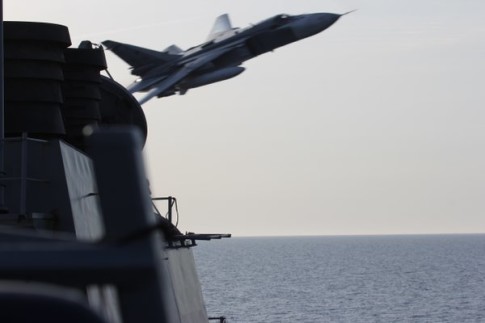 – “They Should Be Met By Force” – US General Warns Russia Future Fly-Bys “Won’t End Well For You”:

Russia should be warned that its dangerous flybys of U.S. ships and planes could be met by force, President Barack Obama’s nominee as the next NATO and U.S. European Command commander said Thursday.

“Sir, I believe that should be known — yes,” Army Gen. Curtis M. “Mike” Scaparrotti said when asked by Sen. John McCain whether Russia should be told that the U.S. would take action if American lives were endangered.

Pursuing the same line of questioning, Sen. Joe Donnelly, an Indiana Democrat, asked Scaparrotti whether the Russians should be told that “next time it doesn’t end well for you.”

The general responded that “we should engage them and make clear what’s acceptable. Once we make that known, we have to enforce it.

“I think they’re pushing the envelope in terms of our resolve,” Scaparrotti added. “It’s absolutely reckless, it’s unjustified and it’s dangerous.” As NATO commander, he said one of his first actions would be to review the rules of engagement for U.S. and allied forces in the region.

On Tuesday, a Russian helicopter circled around the Cook seven times at a low altitude. About 40 minutes later, two Su-24s made 11 close-range and low-altitude passes.

Secretary of State John Kerry later said that the sailors of the Cook would have been justified in shooting down the Russian fighters.

“It’s unprofessional, and under the rules of engagement that could have been a shoot down, so people need to understand that this is serious business, and the United States is not going to be intimidated on the high seas,” Kerry said in an interview on CNN Espanol.

Scaparrotti, now commander of U.S. Forces Korea, was testifying before the Senate Armed Services Committee at what could be called a historic confirmation hearing.

Seated next to him at the witness table was Air Force Gen. Lori Robinson, currently commander of Pacific Air Forces, who has been nominated as the next commander of U.S. Northern Command and the North American Aerospace Defense Command (NORAD). If confirmed, Robinson would become the first woman to command a combatant command.

Both Robinson and Scaparrotti appeared headed to easy confirmation. “I look forward to moving your nominations through the U.S. Senate,” said McCain, an Arizona Republican and the SASC chairman.