“Thatcher took on the miners as part of her (Rothschilds) plan to destroy union power and eventually 90% of manufacturing in UK.

Move on 40 years. The tory government cow-tow to Big-Pharma, who want to privatise the beautiful National Health Service…which works.

So let’s screw the Junior Doctors & Nurses by paying them WalMart/McDonald’s wages & demanding more hours till they squeek.

Recipe for the execution of the NHS.” 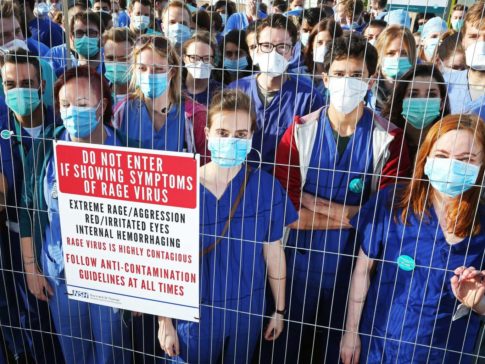 Jeremy Hunt has rejected a last-minute attempt to bring about an end to next week’s all-out strike of junior doctors describing the initiative a “Labour opportunism”.

Mr Hunt dismissed a letter from the shadow Health Secretary, Heidi Alexander, urging him to agree to trial the new junior doctors’ contract rather than impose it across the NHS unilaterally.

The letter, which was also signed by two former heath ministers – including a Conservative – also said there should be an independent evaluation of the so-called “weekend effect” which sees higher mortality rates for patients admitted at weekends.

A BMA source said they supported the initiative and that if the Government agreed to limited trials of a pilot of the contract, representatives would be prepared to meet them to discuss the possibility of calling off the strike on Tuesday and Wednesday.

The walkout would see all junior doctors, including Accident & Emergency staff, walk out – the first time such action has been taken in NHS history by doctors.

But Mr Hunt rejected the plan warning that “further delay” in introducing the contract “just means we will take longer to eliminate the weekend effect”.

Instead he put forward a counter-proposal to the BMA in a letter to the organisation’s chairman Mark Porter.

In it he said he was prepared to meet the BMA to discus “workforce and funding requirements for seven-day services” as well as other issues outside the contract that have been of concern to junior doctors.

These include improvements in training, improving work-life balance and the burden of examination and training fees.

But he warned: “The extreme action planned will be deeply worrying for patients, and place enormous additional strain on our NHS at a time of intense pressure.

“I therefore appeal to you one final time to call off strike action that will see doctors withdraw potentially life-saving care, and to meet with me on Monday to discuss a better way forward.”

In their letter to Mr Hunt, Ms Alexander, the former Conservative health minister Dr Dan Poulter, former Lib Dem health minister Norman Lamb and the SNP’s Dr Philippa Whitford said the medical royal colleges and patient groups have said the imposition or unilateral introduction of the contract is the wrong approach and “risks permanent damage to the future of the medical workforce”.

“If it remains your intention to introduce this new contract, we believe it should be piloted in a number of trusts/across a number of deaneries and for its impact on patients, staff and the ‘weekend effect’ to be independently evaluated,” they said.

Ms Alexander told Sky News: “I think Jeremy Hunt would need to sit down urgently today, this afternoon, with the BMA, to talk about what the scope of the pilot would be.”

She added: “If it is shown to improve patient care and to have a positive impact upon junior doctors with regard to the hours they are working and the quality of care that they are able to provide, I think any reasonable person at that point would say, well actually, we need to look at what the evidence shows us and move forward in a constructive way.”

But the Government said it had 75 meetings with the BMA and three years of talks, and delaying reform further would mean not taking an important step in improving weekend care.

A spokesman said: “We have always said that we want to introduce this contract in a phased way – for around 11% of junior doctors from August – precisely so any initial problems can be ironed out. That’s why this is simply ill-informed political opportunism from the same Labour Party responsible for the flawed contracts we have now.”