“…they want your fucking retirement money.

They want it back, so they can give it to their criminal friends on Wall Street. 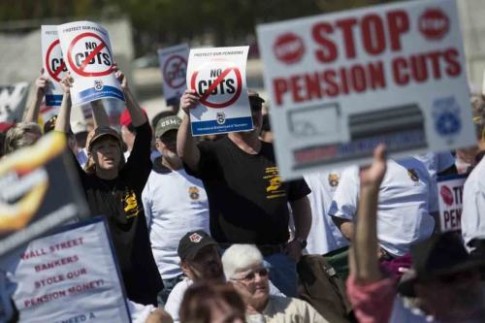 – “This Is Going To Be A National Crisis” – One Of The Largest U.S. Pension Funds Set To Cut Retiree Benefits:

A dark storm is brewing in the world of private pensions, and all hell could break loose when it finally hits.

As the Washington Post reports, the Central States Pension Fund, which handles retirement benefits for current and former Teamster union truck drivers across various states including Texas, Michigan, Wisconsin, Missouri, New York, and Minnesota, and is one of the largest pension funds in the nation, has filed an application to cut participant benefits, which would be effective July 1 2016, as it “projects” it will become officially insolvent by 2025. In 2015, the fund returned -0.81%, underperforming the 0.37% return of its benchmark.

Over a quarter of a million people depend on their pension being handled by the CSPF; for most it is their only source of fixed income.

Pension funds applying to lower promised benefits is a new development, albeit not unexpected (we warned of this mounting issue numerous times in the past). For many years there existed federal protections which shielded pensions from being cut, but that all changed in December 2014, when folded neatly into a $1.1 trillion government spending bill, was a proposal to allow multi employer pension plans to cut pension benefits so long as they are projected to run out of money in the next 10 to 20 years. Between rising benefit payouts as participants become eligible, the global financial crisis, and the current interest rate environment, it was certainly just a matter of time before these steps were taken to allow pension plans to cut benefits to stave off insolvency.

The Central States Pension Fund is currently paying out $3.46 in pension benefits for every $1 it receives from employers, which has resulted in the fund paying out $2 billion more in benefits than it receives in employer contributions each year.

As a result, Thomas Nyhan, executive director of the Central States Pension Fund said that the fund could become insolvent by 2025 if nothing is done. The fund currently pays out $2.8 billion a year in benefits according to Nyhan, and if the plan becomes insolvent it would overwhelm the Pension Benefit Guaranty Corporation (designed by the government to absorb insolvent plans and continue paying benefits), who at the end of fiscal 2015 only had $1.9 billion in total assets itself. Incidentally as we also pointed out last month, the PBGC projects that they will also be insolvent by 2025 – it appears there is something very foreboding about that particular year.

Ava Miller, 64, and her husband, Ed Northrup, 68, could see their combined monthly pension income cut to about $3,000 from the nearly $7,000 they receive now, according to a letter they received from Central States in October.

If the cuts go through, Miller, who worked as a dispatcher in Flint, Mich., said they will need to dip into their savings to help cover their $1,300 mortgage payment, heating bills and trips to visit her 84-year old mother. Northrup, a retired car hauler, has started applying for truck driving jobs that could supplement their potentially smaller pension payments.

What makes the cuts more painful, Miller said, is that she took pay cuts so that the company could continue making contributions to the pension.

“I did everything I was supposed to,” Miller said, adding that she and her husband made extra payments on their car loan to cut down on their monthly bills after they received letters in October informing them of the potential cuts.

All hope is not lost, however.

Democratic candidate Bernie Sanders has proposed a bill that would repeal the measure allowing cuts, and instead calls for the government to provide assistance to troubled pension funds.

In other words, another bailout.

Which brings us to the current juncture, where we remind everyone that the governments own safety net, the PBGC has itself become insolvent, and according to CNN, projects that more than 10% of the roughly 1,400 multiemployer plans, covering more than 1 million workers fits the current criteria to be able to apply for benefit cuts for participants.

“This is going to be a national crisis for hundreds of thousands, and eventually millions, of retirees and their families. It’s going to open the floodgates for other cuts.” said Karen Friedman, executive president of the Pension Rights Center. 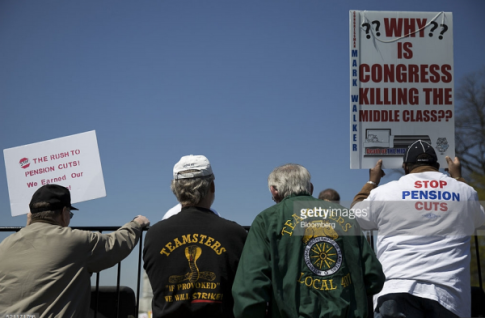 We can’t help but wonder that as more pension funds become insolvent, and more and more participants are forced to take reductions in benefits, whether helicopter money won’t soon become a reality for the United States, even before it becomes one in Japan. Especially if it is spun by some opportunistic politicans as the “only hope” for America’s workers to preserve some of their retirement savings.

1 thought on ““This Is Going To Be A National Crisis” – One Of The Largest U.S. Pension Funds Set To Cut Retiree Benefits”