A transcript of a telephone conversation released by The State Department proves once and for all that Hillary Clinton knowingly lied about the Benghazi attack on the American diplomatic compound there in 2012.

The transcript, obtained under a FOIA request by Judicial Watch, details a call immediately after the attack between the then-secretary of state and then-Egyptian Prime Minister Hisham Kandil.

“We know the attack in Libya had nothing to do with the film,” Clinton told Kandil. “It was a planned attack – not a protest.”

Kandil responded “You’re not kidding. Based on the information we saw today we believe that group that claimed responsibility for this is affiliated with al-Qaida.”

A press statement Clinton released to the American public on September 12th, the same day as this conversation, suggested that the attack was a protest that had been spurred by “inflammatory material posted on the Internet” and then gotten violent.

It was clear, however, that Clinton knew this was not the case. In emails previously revealed as part of the investigation into Hillary’s home server, she also admitted that she knew the YouTube video was not the catalyst for the attack.

When evidence emerged that the massacre was indeed a premeditated terrorist attack, Clinton attributed her false statements to confusion produced by the “fog of war.”

The documents were previously provided to the Select Committee on Benghazi. The release by Judicial Watch marks the first time the public has had access to the files.

Judicial Watch President Tom Fitton said that the State Department has been holding the documents back purposefully, claiming that the Watchdog group’s request for documents related to the Benghazi attacks did not encompass these particular materials.

“There are two scandals here. The first is Hillary Clinton was telling different stories to different foreign leaders about the Benghazi attack – including an admission that it was a terrorist attack,” Fitton stated. 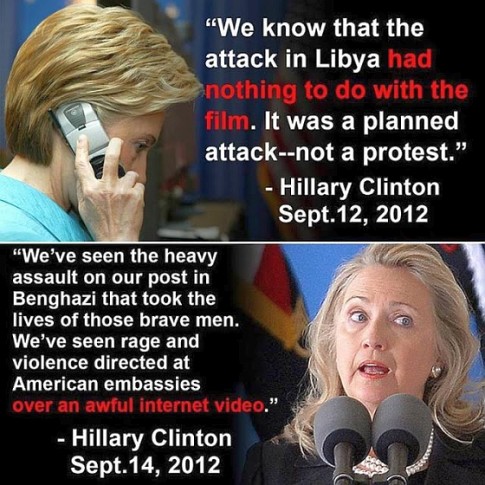