In early 2015, after seeing a staggering $1.4 trillion in Euro area government debt trade at negative interest rates (the number has since grown to $6 trillion) we wondered when the bailout of insolvent governments was going to make its way to other debtors. Our question was quickly answered when we found that a negative rate mortgage had been issued by Nordea Credit, a bank in Denmark. Recently, even the WSJ finally stumbled on this bizarre inversion of traditional borrower obligations.

We noted at the time that this this was the first of many such paradoxes, as eventually more and more banks would begin to fall in line with ECB expectations and lend at slightly negative (at first, then progressively more negative) rates, rather than lose even more money as a result of leaving cash in the ECB deposit facility.

This is just the beginning: according the Danish media outlet, as a result of variable-refinancing, as recently as a week from now “a greater share of customers could have a negative rate.”

Earlier this month we got evidence of that when we learned that a bank had issued a negative interest rate on a mortgage in Belgium.

Now, courtesy of news.com, we learn about another bank that is paying customers to take out a mortgage, this time in the Netherlands. 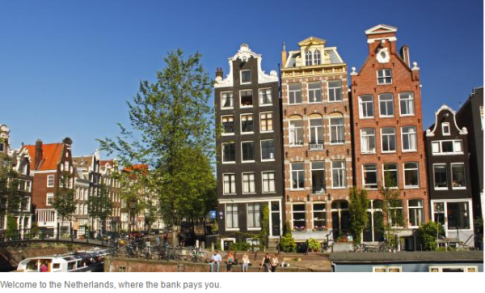 As a result of entering into a variable mortgage agreement that was denominated in Swiss Francs, and set at 0.7% above Swiss Libor, Achmea Bank now finds itself having to pay borrowers to take out a mortgage.

There is more to this story however.

It took a court case to force the bank to pay what it owed. As CHF Libor rates plummeted on the heels of the ECB’s NIRP policy, instead of paying the borrowers their contractual due, the bank tried to get away with simply telling the borrowers that they didn’t owe anything on their interest payment.

In a ruling announced on Monday, the Netherlands’ consumer financial products watchdog, Kifid, said it had sided with the unnamed holders of the variable interest rate mortgage, who brought the case, rather than with lender Achmea NV.

The mortgage was denominated in Swiss francs, with a variable rate set at 0.7 per cent above Swiss Libor, a benchmark rate. When Swiss Libor fell below minus-one per cent in January 2015, the bank should have paid the mortgage holders around 0.3 per cent interest, Kifid said in the ruling.

Financial journalist Alan Kohler had some pointed comments around the policy of NIRP and how it’s devolving into ridiculous things such as negative mortgage rates. He rightfully asserts that central banks will look back on this period as a time in which more harm was done than good (as is always the case).

He begins by comparing the central banks’ use of NIRP with significant global events that haven’t necessarily fared very well, including very creation of the European Union.

“We may well look back ruefully on negative interest rate policy, or NIRP, from our post-apocalyptic dirt-floor humpies as one the greatest idiocies of the 20th and 21st centuries, up there with America’s sack and dump of Iraq in 2003 and 2011, the repeal of the Glass Steagall act and the Maastricht Treaty in Europe,” he wrote.

He then goes on to say what we know all too well, which is that whenever the central banks finally take a break from their textbooks and broken excel models, they’ll realize that nothing they’ve done has worked, and that they’ve caused more damage than otherwise would have been the case.

“Unless a miracle happens and the European and Japanese economic cadavers suddenly sit up and rub their eyes, central banks will eventually have to give up and admit defeat. The hope will be that not too much damage has been inflicted.

He sums it up by pointing out one of the main goals of central banks to begin with, which is of course to take from the savers and distribute elsewhere.

“But that is central banking for you, in the era of leverage: take from the savers and give to the borrowers in the hope that they will ‘do something’.

“Not so far, they’re not … they’re just punting it on real estate.”

Meanwhile, we look forward to finding out how many banks are trying to do what Achmea unsuccessfully tried to, i.e., to not pay borrowers what is owed, as variable rate mortgages continue to go negative, and how many ultimately have to comply with the contractual fine print. But the biggest joke will be on the depositors: because while banks will, grudgingly, pay money to those who live on credit, those funds will be provided by savers, as depositors across Europe will soon be forced to pay to keep their money in the bank.

Sadly, such is the upside down world of the “new normal”, where savers are punished while those living beyond their means, are rewarded.