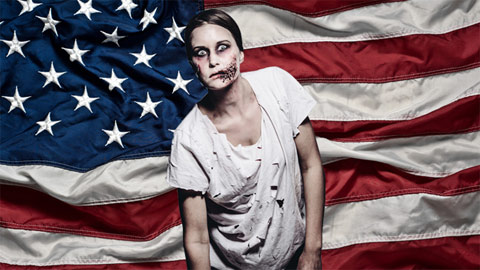 What level of hell is in the process of descending upon this earth?

The twisted mind of strategic thinking must consider all contingencies, and prepare to defend against it.

And whether it seems like a joke or not, the Pentagon has a document preparing its forces for the remote possibility – or perhaps imminent cult film future pre-programmed through the media – of an all-out Zombie apocalypse.

The U.S. military has always been the one place in government with a plan, forever in preparation mode and ready to yank a blueprint off the shelf for almost any contingency.

Incredibly, the Defense Department has a response if zombies attacked and the armed forces had to eradicate flesh-eating walkers in order to “preserve the sanctity of human life” among all the “non-zombie humans.”… [A Concept Operations document C]alled “CONOP 8888.”

American TV viewers know all the twists and turns of the debasing fight against undead hoards of the human race, unconscious automatons intent on eating brains and over-running humanity.

But to spoil the fun before you’ve had it, keep in mind that this entire document, though “real,” holds a double meaning, alluding to the plan for maintaining dominance over the masses, who are largely unthinking and tend to follow propaganda prompts and orders to obey.

As its authors note in the document’s “disclaimer section,” “this plan was not actually designed as a joke.” Military planners assigned to the U.S. Strategic Command … looked for a creative way to devise a planning document to protect citizens in the event of an attack of any kind.The officers used zombies as their muse.

It is essentially a generic blueprint for occupying any major episode of civil unrest, economic collapse or major natural disaster. So what is really coming that the Pentagon isn’t telling us about?

If it seems to weird to be true, just see the Counter-Zombie Dominance PDF via Scribd for yourself. 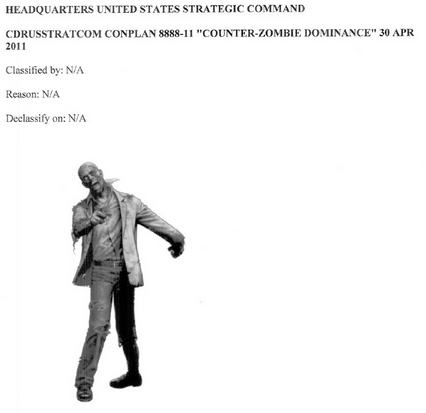 Specifically, the document discusses how the use of head shots and martial law to restore civil order would be utilized:

“Establish and maintain a vigilant defensive condition aimed at protecting humankind from zombies. If necessary, conduct operations that will, if directed, eradicate zombie threats to human safety.”

“The only assumed way to effectively cause casualties to the zombie ranks by tactical force is the concentration of all firepower to the head, specifically the brain.”

“Zombies are horribly dangerous to all human life and zombie infections have the potential to seriously undermine national security and economic activities that sustain our way of life.”

“Given the rapidity at which zombie outbreaks spread, decisive, overwhelming, and possibly unilateral military force may be required to negate the zombie threat.”

“Given the likelihood of an all out threat to ‘human survival’, it is likely that this plan will be executed with a declaration of martial law with CONUS and U.S. territories.

The report also includes several nods to become personally prepared for all contingencies – including use of natural resources, and a reinforcement in the home or shelter:

“Rain will be vitally important to human survival. If civil water supplies are cut off, humans will have to rely on other means to obtain water… it will be difficult to determine if ground water is a vector for zombie infection.”

“Humans who do not shelter-in-place within a sturdy structure that protects them from the direct effects of air currents that could carry pathogens or toxins will be at increased risk of contamination, death and injury.”

Many preppers are expected to survive the zombie apocalypse, and define the character of what is left of humanity.

Will you be among them?

The Walking Dead: 7 Mistakes That Would Get Somebody Killed in a Real Zombie Apocalypse

How to Prepare for the Zombie Apocalypse

What Do You Prep For: The Zombie Apocalypse: “Assume The Just In Time Infrastructure That Supplies Our Society Breaks Down”

Zombie Entertainment: A Lesson in Cognitive Dissonance and the Red Pill