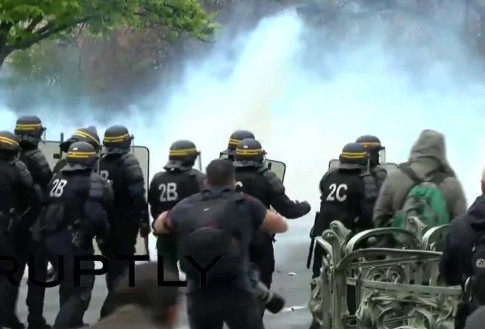 Last week, when we reported on the latest clashes between French police and protesters in the ongoing labor reform saga, we said that “police used tear gas to disperse thousands of angry activists across the nation, who are protesting new labor reforms.” According to the proposed reform states, employers would pay only 10% of overtime bonus, instead of the current 25%, making local workers understandably angry.

In Paris the protest started in Place de la Nation, the same place where previous anti-labor rallies took place. The demonstrators threw bottles with flammable liquid and stones at police officers.  Video footage relayed on social media showed some hooded youths jumping on cars and taunting police. CGT chief Martinez played down reports of a dozen arrests, saying there was often a bit of trouble caused by “some people who have nothing to do with the issue”.

Last Thursday’s day of protest, the fourth in a month, “has been billed by local media as a make-or-break test of strength for President Francois Hollande, plagued by low popularity and a jobless rate stuck stubbornly above 10 percent as mid-2017 elections loom” and where anti-Euro frontrunner Marine Le Pen looms large.

At issue is a proposed overhaul of France’s labor code, a set of regulations bosses claim deters recruitment. Critics say the reforms will lead to worse working conditions and more sackings. The reforms, due to be debated in parliament next week, would give employers more flexibility to agree in-house deals with employees on working time.

Today, the protest picks up where it left off last week, and as AFP reports, from 2,000 to 8,000 people took to the streets of the French capital. Students have been repeatedly rallying against labor law reforms recently proposed by Labor Minister Myriam El Khomri. The French authorities are desperately trying to battle high unemployment in the country, and have suggested cutting overtime pay for work beyond 35 hours.

As RT reports, more tear gas has been deployed by riot police against a massive rally in Paris denouncing recently proposed labor reforms. Protests have recently swept the whole of France, with a Saturday rally in Rennes also taking a violent turn.

Hundreds of protesters were seen marching through the streets of Paris, some of them setting off firecrackers.

Later, a stand-off between rows of riot police hooded youngsters took place in central Paris, with each side taking turn to advance on the other. The hooded protesters were throwing stones at the police who responded with more tear gas.

The protest in the French capital started on Place de la Nation, the same spot where previous anti-labor rallies took place. A heavy police presence has been reported in the area. “Still no fear” and  “Democracy, where are you?” were written on demonstrators’ banners.

But back to Paris, where the situation is tense as can be seen on the following live feed showing the ongoing standoff between riot police and protesters.