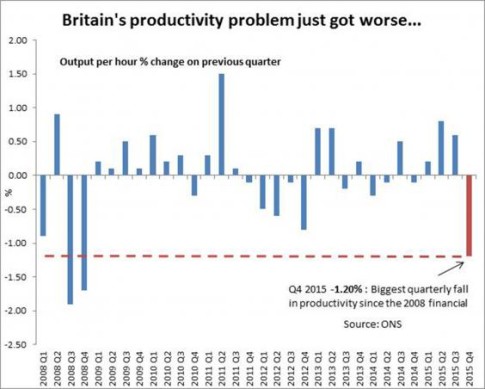 – Britain suffers biggest downturn in productivity since the financial crisis:

Britain has lurched further into its national productivity crisis, with hourly output at the end of last year registering its biggest quarterly fall since the 2008 financial crisis.

Productivity, the crucial statistical metric that underpins overall economic growth and sustainable increases in national living standards, fell by 1.2 per cent in the three months to December, the Office for National Statistics has confirmed.

That was the most severe fall since the final quarter of 2008, when the UK was in the grip of its most brutal economic downturn since the end of the Second World War.

The confirmation of the slippage is a bitter blow to hopes that the UK was finally escaping the productivity stagnation that has bogged down the country since the banking crisis. The fourth quarter decline almost entirely wipes out the decent growth registered in the second and third quarters of last year, and leaves the nation’s level of output per hour no higher than it was at the end of 2007 – almost a decade of stagnation.

The latest decline in the UK’s levels of output produced per hour worked means that Britain’s national productivity is now a remarkable 15 per cent below where it would have been if the pre-crisis trend growth of productivity had carried on. That shockingly poor performance compounds the UK’s status as an international productivity laggard. Britain already has the weakest levels of output per hour of any nation in the G7, with the single exception of Japan.

And there will be more productivity disappointment to come according to the Office for Budget Responsibility. The Treasury’s official independent forecaster made a major downward revision to its productivity growth forecasts in last month’s Budget. The OBR now assumes that the UK’s trend productivity rate over the next five years will rise to just 2 per cent, down from its previous forecast of 2.2 per cent forecast.

That downgrade is one of the main reasons the OBR revised down its GDP growth and tax revenue forecasts last month, forcing the Chancellor to take drastic measures to preserve his pledge to run an absolute budget surplus in 2020.

“Weakness in productivity is starting to look like a structural feature which implies lower potential growth and lower growth of real incomes per head for the UK in coming years,” said Michael Saunders of Citigroup.

Suren Thiru of the British Chambers of Commerce said the atrocious productivity figures were due to “deep-rooted structural problems in our economy that have dampened productivity – from skills shortages to infrastructure bottlenecks and limited growth finance [from banks]”.

James Sproule of the Institute of Directors said the figures were “unwelcome” but cautioned against alarm. “The key thing is not too get too worried about one statistic. There is no point in comparing ourselves to the pre-crisis productivity trend, which was a feature of a bubble about to pop,” he said. 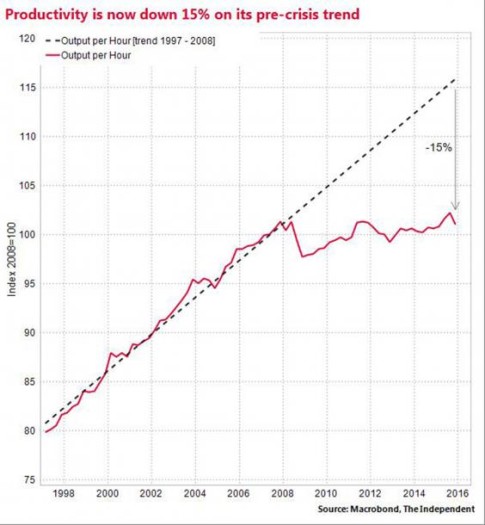 In recent years George Osborne and David Cameron have hailed the strong growth in UK jobs, with the working age employment rate currently at a record high of 74.1 per cent. There are 2.4 million more jobs in the country today than in March 2010. The average number of hours worked each week in that time has shot up from 914 million to more than 1,000 million. Yet GDP growth has been severely disappointing, with the UK experiencing one of its weakest ever recoveries from a recession and thus giving rise to the stagnation of productivity.

The OECD has urged the UK to tackle the productivity problem by ramping up public infrastructure investment. Yet under the Government’s plans, public sector net investment – a proxy for public infrastructure spending – is set to fall to just 1.5 per cent of GDP by 2019-20, down from 1.8 per cent currently and well below the 3.4 per cent rate from when George Osborne came into office in 2010.