– Alibaba Surpasses Walmart As Largest Retail Company In The World:

We may not have the exact numbers yet, but in a filing with the SEC on Tuesday, China’s online retail behemoth Alibaba Group announced that it had “become the largest retail economy in the world” at the end of its fiscal year on March 31, “as measured by gross merchandise volume (GMV) on its China retail marketplaces.” As IBT notes, the company has yet to declare its financial results for its last quarter and the complete fiscal year, but the announcement makes it clear that BABA surpassed the $482.1 billion in 2015 revenues reported by Wal-Mart Stores Inc. for its fiscal year ended Jan. 31. To wit:

Alibaba Group Holding Limited announced on April 5, 2016 that as of March 31, the end of its fiscal year 2016, it has become the largest retail economy in the world as measured by annual gross merchandise volume (GMV) on its China retail marketplaces. PricewaterhouseCoopers (PwC) has performed agreed upon procedures on data relevant to Alibaba Group’s GMV

As a reminder, two weeks prior to the SEC filing, Alibaba’s Executive Vice Chairman Joe Tsai announced in a blog post on March 21 that “with 10 days remaining in our fiscal year ending March 2016, Alibaba’s China retail marketplace platforms surpassed RMB 3 trillion [yuan] in GMV. That is about [$]476 billion in U.S. dollars and, if the platforms we operate were a province, we would rank as the 6th largest provincial economy in China.”

Inferring a full year’s revenue from that number suggests that Alibaba closed the books with roughly $490 billion, or about $8 billion in sales more than America’s flagship discount retailer. 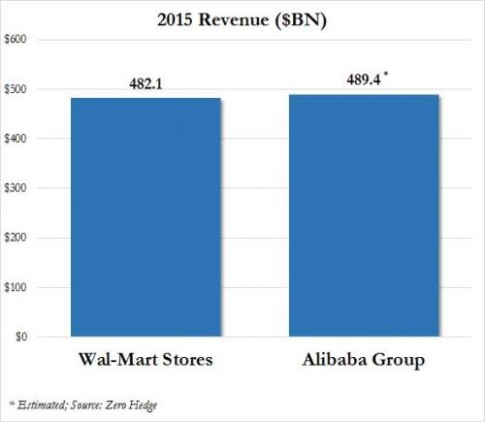 According to another statement from Alibaba, its online trading volume had reached about 10 percent of the total retail volume in China and directly generated 15 million jobs as well.

“We used 13 years to demonstrate the power of a different business model compared with brick-and-mortar retailers,” the statement said, according to the China Daily.

For now WMT’s market cap remains modestly bigger, even if BABA’s LTM multiple of 19x is about 4 turns greater than Wal-mart’s. As for the $275 billion Amazon, well that’s a different story entirely…