I keep hearing that the past 6 or 7 years in equities is just part of an even longer term secular bull market.  And it strikes me very curious that investors continue to pay these fee based money managers and chief market strategists who continue to sell this theory.  Let me show you a chart and then provide a very brief parable for you to consider. 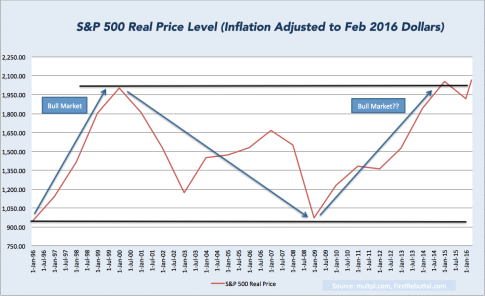 A man moves out to the woods and his family only eats what he catches from the lake.  So on his first morning in the woods he awakens early, grabs his gear and goes fishing.  After anxiously waiting most of the day he gets a fish on but then loses it before it is safely in the boat.  He reels the line in and sees the hook broke.  So he paddles to the marina and buys a new hook from the man who sold him the first one and then he heads back out.  It is now getting late but he decides to give it one more cast and to his excitement he gets a fish on and this time gets the fish in the boat.  He paddles home to show his family the supper he caught.

Now does he have one or two fish to show his family?  That’s right, while he caught two fish, the first was lost, and so he has only one to feed his family.  But for the guy at the marina selling poor quality hooks, he actually did profit, not from the fish but from keeping the man fishing.  So perhaps it’s all about perspective.  That is, are you feeding your family from actual investment gains or from scalping fees around other people’s investing?

Let’s remember the point of investment is to gain purchasing power through wealth appreciation.  So first, let’s not focus on nominal value as the above chart indicates 100% of the S&P 500 ‘gains’ since 2000 have come by way of inflation.  This means the market has created exactly $0 of additional purchasing power for investors over the past 15 years.  That’s right, none, zilch, nada.  Want to explain that one away Zandi??  Second, let’s be honest, now I know finance is certainly not the place for honesty but let’s try.  Suggesting that achieving the same market gains two separate times after having lost them the first time is somehow two separate bull markets is total nonsense unless you are profiting from the ride rather than the final destination.  Happy trading!