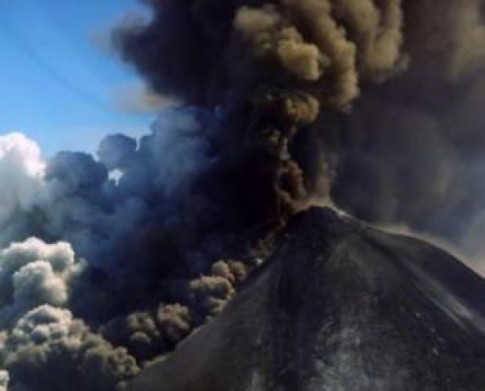 Two volcanoes are erupting on the Pacific “Ring of Fire” indicating a massive build-up of tectonic stress on the west coast of North America.  It began at 4:18 PM Alaska time (8:19 PM Eastern Time) when the Pavlov volcano on Alaska’s Aleutian Island Chain, blew ash, stone, dirt, smoke some four MILES into the air before lava began seeping out.

The US Geological Survey mentioned that the Pavlov Volcano, around 600 miles southwest of Anchorage, has erupted at 4.18pm local time.

The agency affirmed that the eruption led to tremors on the ground. It has raised the volcano alert level to ‘warning’ and the aviation warning to ‘red’. The USGS said that the Pavlov Volcano has 40 known eruptions.

Last time, it erupted in 2013 and at that time, the plumes rose 27,000 feet. Considered to be one of the most consistently active volcanoes in the Aleutian arc, other eruption on the Pavlov volcano has generated plumes as high as 49,000 feet.

The Alaska Volcano Observatory said, “As of 4:18 pm AKDT … ash was reportedly moving northward from the volcano. Seismicity began to increase from background levels at about 3:53 pm … with quick onset of continuous tremor, which remains at high levels”.

The volcano is around 7km in diameter and has active vents on the north and east sides close to the summit. Eruptive activity is characterized by sporadic Strombolian lava fountaining that continues to take place many months.

A report published in the ADN News said, “A volcano on the Alaska Peninsula has stirred with new activity this weekend, with volcanologists reporting an eruption Sunday afternoon that sent ash 20,000 feet into the air. The Alaska Volcano Observatory said on its website that the alert level had risen to warning and the aviation color code to red for the Pavlof Volcano, on the Alaska Peninsula about 30 miles northeast of the community of King Cove, and 36 miles from Cold Bay. The fresh eruptions, reported Sunday afternoon, raised the alert level from normal and the color code from green.

Pavlof Volcano is located on the Alaska Peninsula about 37 miles away from Cold Bay and almost 600 miles away from Anchorage. “With over 40 historic eruptions, it is one of the most consistently active volcanoes in the Aleutian arc,” officials wrote. “Eruptive activity is generally characterized by sporadic Strombolian lava fountaining continuing for a several-month period.”

As per the research paper published by the study team, The USGS has raised the volcano alert level to “Warning” and the aviation warning to “Red.” The agency says the volcano, which is about 4.4 miles in diameter, has had 40 known eruptions and “is one of the most consistently active volcanoes in the Aleutian arc.” The USGS says that during a previous eruption in 2013, ash plumes rose 27,000 feet. Other eruptions have generated ash plumes as high as 49,000 feet.

Volcano-alert notifications are produced by Volcano Observatory scientists and are based on analysis of data from monitoring networks, direct observations, and satellite sensors. They are issued for both increasing and decreasing volcanic activity and include text about the nature of the unrest or eruption and about potential or current hazards and likely outcomes. Scientists describe a volcano’s status using the alert levels and color codes and issue different types of notifications to address specific information needs. All notifications are publicly available.

Hours later, the he Popocatepetl volcano which is located 70 kilometers from Mexico City, showed signs of life. That became clear when an ash cloud of up to two kilometers was put away the air. People who live nearby, are advised to cover their mouth and nose with a damp towel. In addition, no one within twelve kilometers arrive at the volcano for safety reasons. Some sixteen years ago, the Popocatepetl erupted for the last time out, requiring as many as 40,000 to be evacuated. Mexico has 3,000 volcanoes, of which 14 are active. 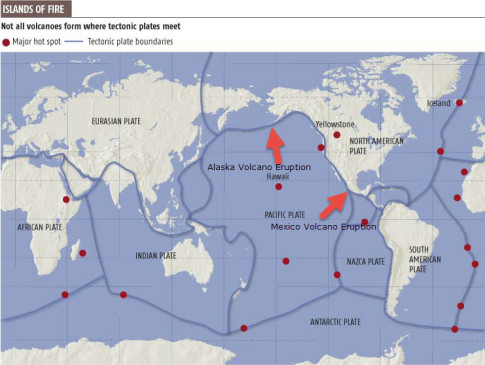 The occurrence of these two volcanic eruptions signals the Pacific Tectonic Plate, which basically “floats” is now pressing heavily against its northern and southeastern boundaries.  That’s causing pressure to be released from the two volcanoes.  It also means there must necessarily be tremendous pressure along the eastern boundary, pressing-up against California.  The potential for this to trigger a large earthquake along the US west coast is therefore greater.