For all the media excitement about the disclosed names in the “Panama Papers” leak, in this case represented by the extensive list of Mossack Fonseca clients, this is not a story about which super wealthy individuals did everything in their power, both legal and illegal, to avoid taxes, preserve their financial anonymity, and generally preserve their wealth. After all, that’s what they do, and it should not come as a surprise that they will always do that, especially following last year’s disclosure by the same ICIJ which revealed a list of 100,000 HSBC clients who had been dutifully avoiding the payment of taxes.

What the story is about is the nebulous world of offshore tax evasion and tax havens, which based on data from the World Bank, IMF, UN, and central banks, hide between $21 and $32 trillion, where registered incorporation agents and law firms in small Caribbean countries (and not so small US states) make the laundering of money and the “disappearance” of the super wealthy, into untracable numbers hidden behind shell companies, possible.

So, in order to learn some more about the real star of this story, the Panamanian lawfirm of Mossack Fonseca, we went to Fusion which has compiled a fascinating story of the company’s history, founders, and key milestone events in its life.

These include the Nazis, the CIA, Mexican drug lords, and of course, the U.S.

First, here is the Nazi and CIA connection:

Jurgen Mossack’s family landed here in the 1960s. During World War II, his father had served in the Nazi Party’s Waffen-SS, according to U.S. Army intelligence files obtained by the ICIJ. Once in Panama, the elder Mossack offered to spy on communists in Cuba for the CIA. (Mossack Fonseca said the firm “will not answer any questions related to private information regarding our company founding partners.”)

Here is the connection to Mexican drug lord Rafael Caro Quintero, and perhaps to the DEA:

Many times Mossack Fonseca has had no clue which nefarious characters were doing what with the companies the firm created – as when Jurgen discovered in 2005, according to internal emails, that he was the registered agent and listed as the director for a company controlled by the Mexican drug lord Rafael Caro Quintero. The co-founder of the Guadalajara Cartel was convicted in Mexico in 1985 for the brutal murder of U.S. DEA agent Enrique “Kiki” Camarena. (Today, Quintero is again considered a fugitive by the US after walking out of prison in 2013 on a technicality).

Mossack Fonseca’s senior partners instructed an employee to carry out their resignation from the company upon the discovery. “Pablo Escobar was like a newborn compared to R. Caro Quintero!” Jurgen wrote in reaction to the news. “I wouldn’t want to be among those he visits after he leaves prison!”

And then there is the state of Nevada:

In 2013, an Argentine prosecutor’s report linked Nevada-incorporated shell companies involved in a major corruption scandal to Mossack Fonseca. When those shell companies became the subject of a federal court battle in Nevada, the leaked files show, Mossack Fonseca employees took steps to remove paper records and to wipe computer files and phone logs at its Las Vegas office. One employee even traveled from Central America to Nevada to bring back files. “When Andrés came to Nevada he cleaned up everything and brought all documents to Panama,” according to an email dated Sept. 24, 2014.

Mossack Fonseca said it “categorically” denies hiding or destroying documents in its statement to the ICIJ: “Let us be clear that it is not our policy to hide or destroy documentation that may be of use in any ongoing investigation or proceeding.”

The leaked records also contradict sworn testimony by Jurgen Mossack, who told the federal district court that his firm was separate from “MF Nevada,” its office in Las Vegas, and had no control over it. Mossack Fonseca “has never maintained an office, establishment or principal place of business in Nevada,” Mossack testified in July 2015. But, according to the ICIJ investigation, internal documents show the opposite, indicating that the firm’s Panama City headquarters controlled MF Nevada’s bank account, and that the firm’s co-founders and one other official with the company owned 100 percent of MF Nevada.

Why is Nevada important? Because recall that according to a recent investigation by Bloomberg, “The World’s Favorite New Tax Haven Is the United States” … 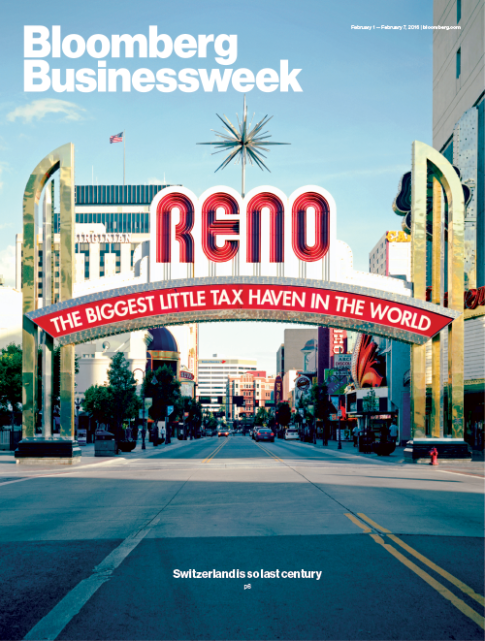 … and specifically several US states such as Nevada, Wyoming and South Dakota.

After years of lambasting other countries for helping rich Americans hide their money offshore, the U.S. is emerging as a leading tax and secrecy haven for rich foreigners. By resisting new global disclosure standards, the U.S. is creating a hot new market, becoming the go-to place to stash foreign wealth. Everyone from London lawyers to Swiss trust companies is getting in on the act, helping the world’s rich move accounts from places like the Bahamas and the British Virgin Islands to Nevada, Wyoming, and South Dakota.

“How ironic—no, how perverse—that the USA, which has been so sanctimonious in its condemnation of Swiss banks, has become the banking secrecy jurisdiction du jour,” wrote Peter A. Cotorceanu, a lawyer at Anaford AG, a Zurich law firm, in a recent legal journal. “That ‘giant sucking sound’ you hear? It is the sound of money rushing to the USA.”

That money is rushing for one simple reason: dirty foreign – and local – money is welcome in the U.S., no questions asked, to be shielded by the most impenetrable tax secrecy available anywhere on the planet.

One may even say that nowadays, US-based tax havens are the new Switzerland, or Bahamas or, for that matter, Panama. Indeed, for most Americans, offshore tax haven are now meaningless with the passage of the FATCA law, which makes the parking of dirty US money abroad practically impossible. So where does that money go instead – it stays in the US:

Trident Trust Co., one of the world’s biggest providers of offshore trusts, moved dozens of accounts out of Switzerland, Grand Cayman, and other locales and into Sioux Falls, S.D., in December, ahead of a Jan. 1 disclosure deadline.

“Cayman was slammed in December, closing things that people were withdrawing,” said Alice Rokahr, the president of Trident in South Dakota, one of several states promoting low taxes and confidentiality in their trust laws. “I was surprised at how many were coming across that were formerly Swiss bank accounts, but they want out of Switzerland.”

And, to top it off, there is one specific firm which is spearheading the conversion of the U.S. into Panama: Rothschild.

Rothschild, the centuries-old European financial institution, has opened a trust company in Reno, Nev., a few blocks from the Harrah’s and Eldorado casinos. It is now moving the fortunes of wealthy foreign clients out of offshore havens such as Bermuda, subject to the new international disclosure requirements, and into Rothschild-run trusts in Nevada, which are exempt.

For financial advisers, the current state of play is simply a good business opportunity. In a draft of his San Francisco presentation, Rothschild’s Penney wrote that the U.S. “is effectively the biggest tax haven in the world.” The U.S., he added in language later excised from his prepared remarks, lacks “the resources to enforce foreign tax laws and has little appetite to do so.”

Yes, Mossack Fonseca may now be history, and its countless uberwealthy clients exposed, but none other than Rothschild is now delighted to be able to fill its rather large shoes.

1 thought on “Mossack Fonseca: The Nazi, CIA And Nevada Connections … And Why It’s Now Rothschild’s Turn”