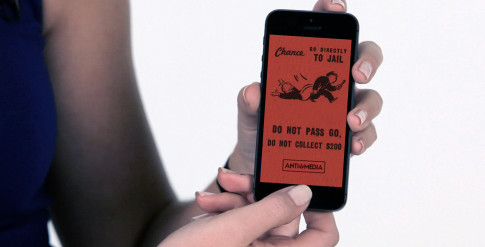 – You Can Now Be Put in Jail For Taking A Screenshot With Your Phone:

United Kingdom — Billions of photos are shared on popular mobile app, Snapchat, every day. The messaging network, used mainly by teens and young adults, allows users to add a lens graphic or doodle over their personal images and instantly share them to hundreds of followers. Once the company server detects the material has been viewed or has expired, the image evaporates after 10 seconds. Due to the self-destructing nature of the images, the quick and easy-to-use app is rumoured to be popular for sexting and the exchange of explicit images.

But like anything on the web, quick fingers can screenshot anything. Reassurances from Snapchat that senders will be notified if the app detects a screen grab has been taken offer little consolation to users. As a result, British authorities have taken things a step further by issuing a severe warning to those thinking of saving the sexy snaps (authorities have also attempted to force apps with encryption capabilities, like Snapchat, to share private data them with them).

The Independent reports that users caught screen-grabbing images and sharing them without the owner’s consent could be sued and face jail time. Under U.K. copyright law, it is illegal to copy an image and make it available to the public without consent. The original owner can sue anyone who does this for copyright infringement.

In addition, those caught saving and sharing ‘raunchy’ snaps could be looking at a much more serious crime. Those convicted of violating Section 33 of the Criminal Justice and Courts Act 2015 — which deems it an offence to disclose private sexual photographs and films with intent to cause distress — could face up to two years behind bars.

According to a Channel 4 News investigation, Generation Sex, the sharing of explicit pictures has become normal teenage behaviour in the U.K. “I get asked for naked pictures…at least two or three times a week,” one 15-year-old girl said.

Jon Brown of the National Society for the Prevention of Cruelty to Children (NSPCC) said the investigation uncovered a “very regular and normal” consumption of hardcore adult pornography by 13-16 year olds. He said the sharing of explicit sexual imagery via photos and video clips is now extremely normal, adding, “I think it’s important to recognise what was previously regarded as unusual, concerning, or sensationalist, now has in fact become the norm.”

While the U.K. government’s crackdown may be a step forward in punishing those guilty of sharing other people’s messages without their consent, what about those that go undetected among the billions shared each day? As a cautionary measure, it would be wise for users to think twice before sending images they wouldn’t want everyone to see.