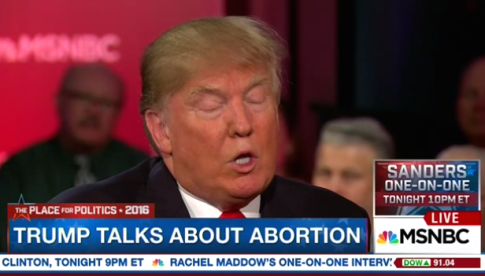 – All Hell Breaks Loose After Trump Says Women Should Be “Punished” For Illegal Abortions:

Although one might fairly question the methodology behind the polls and whether the questions were designed to elicit a certain type of response, it is worth noting that in three separate surveys (NBC, WSJ, and CNN), Trump’s favorability rating with female voters was 27% or less.

Even if one assumes that the polls were inherently biased, there’s probably some truth to the contention that the things Trump has said about women in the past haven’t done anything to help him when it comes to garnering a large percentage of the female vote and may indeed come back to haunt him in a national contest with Hillary Clinton.

Well on Wednesday, in an MSNBC town hall event, Trump was cornered by host Chris Matthews who asked the GOP frontrunner about his position on illegal abortion.

Trump says “there has to be some form of punishment” for women who have abortions. Interview airs tonight at 8pmET.https://t.co/SR3st1X665

Below, you can find the highlights as compiled by Bloomberg.

Obviously, this was “gotcha” journalism on Matthews’ part (once he established that he was referring to illegal abortions he knew he could pin Trump between having to either say women should be punished or that women could break the law with impunity), and as we saw last year with the whole Kurds/Quds Hugh Hewitt debacle, Trump is susceptible to badgering. The other problem here is that it isn’t clear that Trump truly believes some of the things he’s forced to say as a Republican candidate, which leads to exchanges like that recounted above. “Don’t overthink it: Trump doesn’t understand the pro-life position because he’s not pro-life,” a Cruz aid tweeted. Here’s Politico with a bit of context:

Trump’s policy idea is a departure from most state abortion restrictions, which don’t impose penalties on the women who get abortions. Typically, any penalties are imposed on the physician who does the procedure.

The anti-abortion movement in recent decades has shied away from the perception that it is “punishing” women for getting abortions. Instead, it has focused on penalties for the physicians who provide them, such as imposing medical or legal restrictions on their practice. In some rare situations, women have faced charges associated with abortions they have attempted on their own.

Having realized this had become a PR fiasco, Trump promptly walked back his comments.

This is a statement released just moments ago, in which the billionaire revises his statement, calling the women “victims”, and stating it is doctors who should be held legally responsible for performing the illegal act:

If Congress were to pass legislation making abortion illegal and the federal courts upheld this legislation, or any state were permitted to ban abortion under state and federal law, the doctor or any other person performing this illegal act upon a woman would be legally responsible, not the woman. The woman is a victim in this case as is the life in her womb. My position has not changed – like Ronald Reagan, I am pro-life with exceptions.

But by the time the Trump campaign released that statement it was far too late. The media, women’s rights groups, pro-abortion groups, as well as all of Trump’s political opponents smelled blood.

“The last person women need to police their health care decisions is someone who sees them not as people, but as ‘fat pigs,’ ‘bimbos’ and ‘disgusting animals,’” Marcy Stech, a spokeswoman for Emily’s List, a pro-abortion-rights group said.

Here’s the reaction from March for Life:

And from Bernie Sanders:

And here’s the Cruz campaign calling Trump a “charlatan”:

Expect this soundbite to play on a loop should Trump end up squaring off against Clinton this fall. Speaking of whom:

Just when you thought it couldn’t get worse. Horrific and telling. -H https://t.co/Qi8TutsOw9