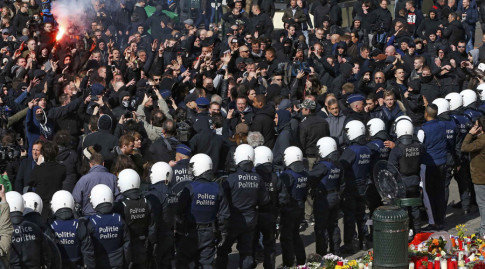 Police in the Belgian capital have been deployed to disperse far-right protesters at memorial for the victims of Brussels attacks, with water cannon having been fired into the crowd.

Law enforcement intervened after tensions erupted between mourners and right-wing protesters during a crowded rally at Brussels’ Place de la Bourse on Sunday.

Thousands gathered to pay tribute to the victims of Tuesday’s deadly attacks in the Belgian capital, Ruptly news agency reported.

People arrived despite the police order, which banned gatherings in Brussels over security concerns.

A group of far-right protesters were rallying under the banner of “March Against Fear,” and then converged with people paying tribute to the terror attacks victims at Place de la Bourse.

Water cans now being shot into far-right crowd, they are moving away from the square. Ppl at the memorial are cheering

The group then confronted Muslim women in the crowds, according to the BBC, who added that Nazi salutes and chants were made by the group, prompting riot police to restore order.

The organizers of the “March Against Fear” said they had canceled their event, originally planned for Sunday.

“We join the authorities in proposing a delay and ask people not to come this Sunday,” AFP cited the organizers as saying in an earlier statement, which added that “the security of our citizens is an absolute priority.”

The marches in the Belgian capital have been called off by the authorities citing security concerns, as well as already high pressure on the police in the city. More raids related to Tuesday attacks were reportedly carried out on Sunday in the Belgian capital, where 28 people were killed and 340 injured this week in terror attacks at Brussels Airport and the Metro. Islamic State claimed responsibility for the assaults.