– Was This The Worst Economist Forecast Of All Time:

When it comes to predicting the future, there has traditionally been a stealthy contest between economists and weathermen as to who is the worst predictor of coming events. Lately, there was some confusion when economists – this includes central bankers and market “strategists” –  tired of being humiliated in public for their terrible predictions, decided to become Monday Morning weathermen (ironically, none more so than those who competed with Groundhog Phil and lost) and blame their lack of foresight on the weather.

This led to even more humiliation for said economisseds (sic) and entertainment for everyone else.

But there is little confusion about what may have been the worst economic forecast of all time. For the answer go to Japan, and back 30 years in time, just after Japan’s mega asset bubble burst when in their desperation to preserve the myth that “all is well”, economists were “predicting” how little Japan’s growth would be impacted as a result of the burst bubble.

They were all wrong.

As HSBC’s Stephen King points out, nowadays, Japan’s “lost decades” are seen to be a blindingly-obvious consequence of the bursting of Japan’s late-1980s stock market and land price bubbles (ahem China). At the time, however, few managed to predict what was apparently so obvious in hindsight.

Which brings us to what probably is the worst economic forecast of all time: in the mid-1990s, the forecasting consensus had every confidence that nominal Japanese GDP would rise 25% over the next five years. Consensus was wrong: by 2000, nominal GDP was more than 24% lower than had been projected five years earlier.

Did the forecast humiliation end there? Oh no.

The gap between forecast and reality got bigger and bigger thereafter. In fact, over 30 years later, Japan’s nominal GDP and GDP per capital now is where it was 30 years ago even as Japan has piled up a total debt load that is now over 400% of GDP.

Does this look familiar? If not, recall this chart? 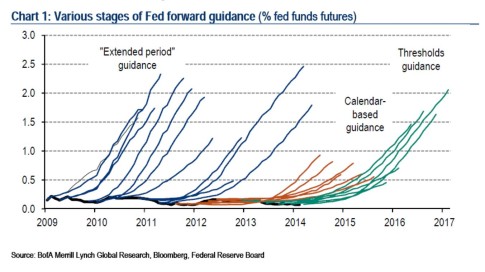 Comical economists aside, “Japanification” is precisely what is happening to the rest of the “developed world” as global growth continues to deteriorate, global debt grows and the only short-term resolution is to keep rates as low as possible… and now, negative across 28% of the entire world.

This weekend we will lay out HSBC’s thoughts on what “turning Japanese” means for the rest of the world. Spoiler alert: only bad things.

In the meantime we ask, when will “economists” be finally laughed off the global stage for the charlatan comedians they all are?