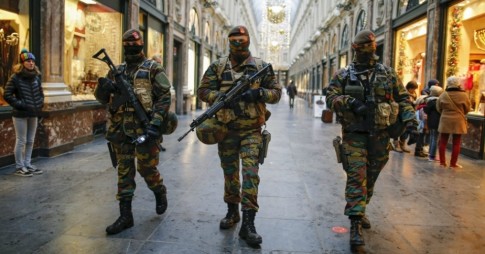 – Belgium May Make Major Shift Toward Fascism in Wake of Brussels Terror Attacks:

(COMMONDREAMS) Just one day after the coordinated attacks in Brussels, the resounding cry from governments, media, and national security experts is that we need less freedoms and more security.

As they did in the wake of the Paris attacks, countries across the continent rushed to tighten border security in the immediate aftermath of Tuesday’s bombings, which killed at least 34 people, striking the airport and a metro station.

British MEP Mike Hookem declared outright that the Brussels attack “shows that Schengen free movement and lax border controls are a threat to our security.”

“Open borders,” he added, “are putting the lives of European citizens at risk.”

“What we need is better cooperation, maximum cooperation between European national intelligence and security services,” Mark Demesmaeker, a Belgian parliament member of the European Conservatives, told CNBC. “We have to unite against this menace,” Demesmaeker added, referring to the Islamic State (or ISIS), which claimed responsibility for the attack.

British author and journalist Max Hastings put it even more bluntly. “Our tolerance of electronic surveillance, subject to legal and parliamentary oversight, seems a small price to pay for some measure of security against threats that nobody—today of all days—can doubt are real,” Hastings said in an address Wednesday at the Foreign Correspondents’ Club in Hong Kong.

In the United States, this fervor translated into an push for lawmakers to act quickly on controversial legislation, that, according to The Hill, would “create a national commission to explore” how the government and law enforcement could access encrypted communications.

“Lawmakers and investigators say authorities were likely blind to the plots because of the secure technology,” The Hill’s Cory Bennett reports, “although the exact role encryption played in each incident remains unknown.”

Rep. Adam Schiff (D-Calif.) admitted as much in a statement, saying: “We do not know yet what role, if any, encrypted communications played in these attacks…But we can be sure that terrorists will continue to use what they perceive to be the most secure means to plot their attacks.”

In a tongue-in-cheek blog post on Wednesday, investigative reporter Marcy Wheeler notes that two of the Brussels attackers were brothers, Khalid and Ibrahim El Bakraoui.

“The El Bakraouis join an increasingly long list of recent terrorists who partner within their nuclear family (the Boston Marathon attack, Charlie Hebdo attack, and Paris attack were all carried out by brothers, and the San Bernardino attack was carried out by spouses),” Wheeler writes.

“Family ties then,” she continues, “may function to provide as much security as any (limited, given the reports) use of encryption.”

“Using [FBI director] Jim Comey, um, logic, we might consider eliminating this threat by eliminating the nuclear family,” Wheeler adds. “Sure, the overwhelming majority of people who use it are law-abiding people obtaining valuable benefit from nuclear family. Sure, for the most vulnerable, family ties provide the most valuable kind of support to keep someone healthy. But bad guys exploit it too, and we can’t have that.”

And despite the blanket media coverage, there has been little discussion as to how Western intervention could have motivated the mass casualties and suicide bombing, as former CIA member Barry Eisler pointed out.

The best, though is self-radicalization. This happens all by itself, like a virgin birth. No connection at all to western policies.

I mean, if instead of “Terrorism Experts,” TV brought on a five-year-old who said, “When people get bombed, they bomb back,” HUGE progress.

Guy Trouveroy,  the Belgian Ambassador to the U.K., is one European official who is raising concerns over the rush to sacrifice the continent’s freedoms to the so-called “war on terror.”

“I would say that to transform our countries into police states, I am not sure that would be the right response. Also because if (we do that) then we start antagonizing communities again,” he said on CNBC.  “You have to realize that it’s not always to protect every single place where human beings assemble and do you want to change your society to such an extent that you make your life much more difficult,” he said. “By doing so, you’re handing over a fantastic victory to these terrorists.”