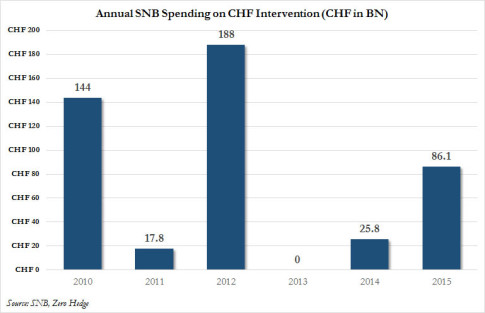 By now it is common knowledge that when it comes to massive, taxpayer-backed hedge funds, few are quite as big as the Swiss National Bank, whose roughly $100 billion in equity holdings have been extensively profiled on these pages, including its woefully investments in Valeant and the spike in its buying of AAPL stock at its all time high.

But while the SNB’s stock holdings are updated every quarter courtesy of its informative SEC-filed 13F (we wish the Fed would also disclose the equities it holds courtesy of its Citadel proxy), getting a gllimpse of the flow is more problematic, and involves waiting for the hedge fund’s, pardon central bank’s annual report.

Earlier today patience was rewarded when the SNB filed its 108th annual report, in which it disclosed that it spent CHF 86.1 billion or $88 billion, on current interventions last year, a measure of its efforts to shield the economy from deflation.

As Bloomberg reports, SNB President Thomas Jordan and his colleagues have repeatedly pledged to step in to prevent the franc from strengthening. They’ve done so even since they gave up a minimum exchange rate of 1.20 per euro in January 2015 on the grounds the interventions required to sustain it were out of proportion to the economic benefit.

This is how the SNB explained its intervention:

In order to fulfil its monetary policy mandate, the SNB may purchase and sell foreign currency against Swiss francs on the financial markets. Foreign exchange transactions can be conducted with a wide range of domestic and foreign counterparties. The SNB accepts well over 100 banks from around the world as counterparties. With this network of contacts, it covers the relevant interbank foreign exchange market. The Singapore branch office facilitates round-the-clock foreign exchange market operations, if necessary.

In 2015, the SNB purchased a total of CHF 86.1 billion of foreign currency, with the vast majority of foreign currency purchases being made in January. During the remainder of the year, the SNB also remained active in the foreign exchange market in order to influence exchange rate developments, where necessary.

This announcement was an odd departure from SNB protocol: Swiss policy makers rarely state outright that they’ve intervened, and analysts use data on sight deposits and foreign currency reserves to gauge the scope of the central bank’s actions. Breaking with the usual protocol, Jordan said in June the SNB had acted to stabilize the franc amid the Greek debt crisis.

In other words, as shown in the chart below, the SNB has spent a total of $471 billion to intervene in currency markets since 2010, amounting to two thirds of the country’s GDP, and in the end failed after the drain simply became too big.

And yet somehow “analysts” think that where Switzerland failed, China will be able successful in maintaining its closed capital account.