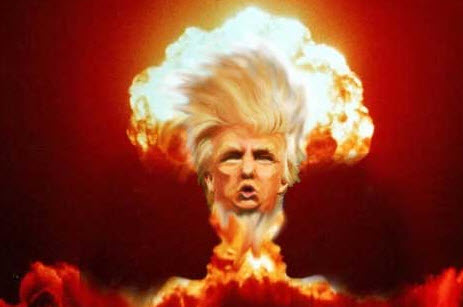 In a new interview with Bloomberg Politics, Donald Trump fleshed out aspects of his national security strategy that include weighing whether NATO is obsolete, an emphasis on the virtues of unpredictability on the part of an American president and the potential use of nuclear weapons against the Islamic State as a last resort.

Trump on earning the respect of the Muslim world:

“They have to respect us. They do not respect us at all and frankly they don’t respect a lot of things that are happening—not only our country, but they don’t respect other things…. The first thing you have to do is get them to respect the West and respect us. And if they’re not going to respect us it’s never going to work. This has been going on for a long time. I don’t think you can do anything and I don’t think you’re going to be successful unless they respect you. They have no respect for our president and they have no respect for our country right now.”

On the possibility of using nuclear weapons against the Islamic State:

“I’m never going to rule anything out—I wouldn’t want to say. Even if I wasn’t, I wouldn’t want to tell you that because at a minimum, I want them to think maybe we would use them…. We need unpredictability. We don’t know who these people are. The fact is, we need unpredictability and when you ask a question like that, it’s a very sad thing to have to answer it because the enemy is watching and I have a very good chance of winning and I frankly don’t want the enemy to know how I’m thinking. But with that being said, I don’t rule out anything.”

On the NYPD’s mosque surveillance program:

“They ended it for no reason. We should bring it back…. I’d expand our laws so that we could do certain things. We’re not playing on the same field. They have no laws. They have absolutely no laws. They kill people and they don’t talk about it. They don’t worry about the law. We do something that’s a little bit harsh and that particular soldier or general or whoever it may be loses pension and loses his life. We’re not playing by the same rules. They’re playing dirty stuff. And we’re not playing that way.”

“I think NATO may be obsolete. NATO was set up a long time ago, many, many years ago. Things are different now, we’re paying too much. As to whether or not it’s obsolete, I won’t make that determination.”

On a face-off with Hillary Clinton on national security issues: