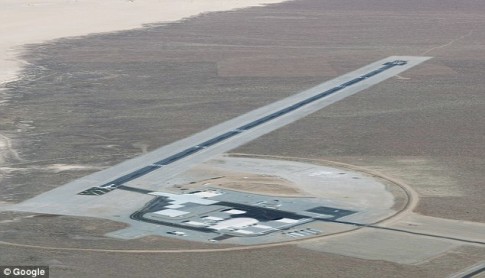 – Area 6 revealed: Top-secret Nevada facility rumored to be where the Pentagon tests high-tech unmanned drones to detect terrorist dirty bombs is as ultra hush-hush as the more infamous Area 51:

A shielded Nevada airbase used by government agencies to test unmanned aircraft has shown up on Google Earth.

Area 6, which was once used for underground nuclear testing, is located in Yucca Flat and is part of the Nevada National Security Site, where 1,000 nuclear tests were conducted between 1945 and 1992.

Four tests and six detonations happened in Area 6 according to a report by the US Department of Energy.

Now, the airbase, which has a 5,000-feet runway, houses aircraft tests for federal agencies such as the Department of Defense and that of Homeland Security, the Las Vegas Review-Journal reported.

These agencies use Area 6 to test unmanned aircraft with sensors and away from the public eye – and to avoid being spied on in space, National Nuclear Security Administration spokesman Darwin Morgan told the newspaper.

‘We have controlled airspace and that gives them opportunities to test various types of platforms, he said.

‘We do a wide variety of work for others – supporting people with sensor development activities. It evolved from the nuclear testing program. We had to have very good sensors to collect data in a split second before they were obliterated.’

The Nevada National Security Site, where Area 6 is located, is run by the National Nuclear Security Administration’s field office in the state, who works with other agencies to develop counterterrorism techniques.

This includes testing out equipment to detect radioactive materials. These materials could be used by terrorists to make dirty bombs, which disperse them with conventional explosives.

Based on the length of the runway, Aera 6 could be used to test small aircraft such as Predator and Reaper drones, Tim Brown, an imagery analyst at defense information website GlobalSecurity.org, told the Las Vegas Review-Journal.

The area’s hangar could house 15 Reapers, he estimated.

Area 6 was built in the 1950s for $9.6 million and the current runway was added in 2005. It is now surrounded by a large hangar and several smaller buildings.

Ground operators control the unmanned aircraft thanks to antennas. A smaller, manned plane is also used to track them as they fly.

The site is located a dozen miles northeast of the secretive Area 51, whose existence was only acknowledged by the US government in 2013.