– “Let’s Be Honest, Trump Is A Loser!”: Elizabeth Warren Loses It, Goes Ballistic On The Donald:

If you’ve ever watched Senator Elizabeth Warren grill a Fed chief on Capitol Hill you know that she’s not one to mince words and she’s not one that’s easily impressed or intimidated.

The darling of the liberal Democrats, Warren looms large over the 2016 race which many suspected she would run in. She didn’t, but the Massachusetts Senator casts a long shadow and on Monday, she had apparently seen all she cared to see of GOP frontrunner Donald Trump.

In a series of tweets and on a Facebook post, Warren lambasted Trump’s business record and his character before warning Americans that just because “he’s a loser everywhere else doesn’t mean he’ll lose the election.”

Here is her message in its entirety: 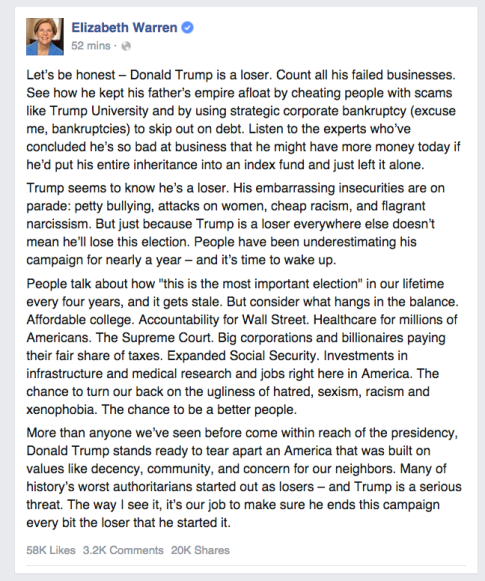 .@RealDonaldTrump stands ready to tear apart an America that was built on values like decency, community, and concern for our neighbors.

Listen to experts who say @realDonaldTrump might have more money today if he’d put his inheritance in an index fund & left it alone.

Let’s be honest – @realDonaldTrump is a loser. Count all his failed businesses. See how he cheated people w/ scams like Trump U.

But just because @realDonaldTrump is a loser everywhere else doesn’t mean he’ll lose this election.

Many of history’s worst authoritarians started out as losers – and @realDonaldTrump is a serious threat.

The way I see it, it’s our job to make sure @realDonaldTrump ends this campaign every bit the loser that he started it.

Forgive us Senator, but if you feel that strongly about it, perhaps you should have had “the courage to run” – to paraphrase your favorite Fed chair.

All you’ve done now is guarantee Trump another couple of hundred thousand votes.