– Bloomberg Stumbles On The “Only One Buyer Keeping The Bull Market Alive”:

Last week, when Bloomberg was celebrating the 7 year anniversary of the third longest, most central bank-supported, and thus “most hated” bull market in history, it said that  “investors are awash in angst, showing little faith the run can continue. They worry about contracting corporate earnings, slowing Chinese growth and uncertainty over interest rates. And they’re walking the talk by pulling cash from stocks at almost the fastest rate on record. It’s not unwarranted – the S&P 500 has gained just 0.5 percent in the last 18 months.” 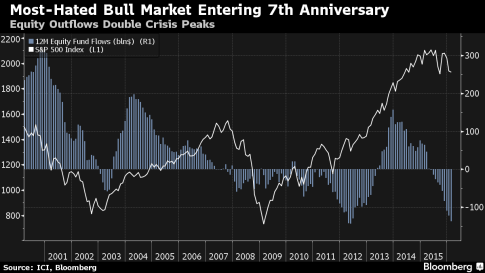 While confused by this unprecedented equity outflow, it then promptly spun the “bullish angle”and noted that just because the rally is the “most hated in history”, it probably will continue:

[W]hen people withdraw money, stocks inversely tend to rise later, according to data since 1984. In the 12 instances when funds experienced monthly outflows that were at least 2 standard deviations from the historic mean, the S&P 500 rose an average 7.1 percent six months later, compared with a normal return of 3.9 percent, data compiled by Bloomberg and Investment Company Institute show.

[Once] things start to turn around, bears will be forced to buy. From Feb. 11 through Monday, a Goldman Sachs Group Inc. index

of the most-shorted companies outperformed the S&P 500 by almost 16 percentage points, the most in data going back to 2008.

What Bloomberg failed to touch upon was who was buying. Ever helpful, we explained what Bloomberg was missing:

What Bloomberg is confused by is that despite this unprecedented rally, after a brief period of inflows in 2013 and 2014, investors have been pulling money out of stocks at a record pace, leading not only Bloomberg but many others to dub the move in the market as the “most-hated rally ever.”

Specifically, what Bloomberg fails to note is that as everyone else has been selling, corporations have unleashed the biggest debt-funded stock buyback spree in history, providing the natural offset to wholesale selling by virtually everyone else, and allowing the market to barely dip over the past year. 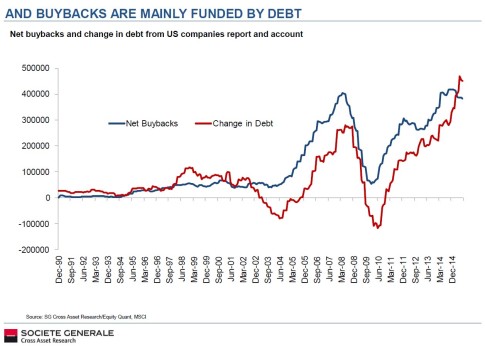 And since the bond market had gotten clogged up in recent months as a result of the market turbulence, that explains why the ECB proceeded with the unprecedented step of explicitly backstopping the IG bond market, a move which we first, and then JPM explained, would encourage even more stock buybacks.* * *

Today, nearly a week later, Bloomberg follows up on its celebratory “anniversary” piece with the much needed clarification hinted here, in an article explaining that “There’s Only One Buyer Keeping S&P 500’s Bull Market Alive.” This is what Bloomberg “uncovered”:

Demand for U.S. shares among companies and individuals is diverging at a rate that may be without precedent, another sign of how crucial buybacks are in propping up the bull market as it enters its eighth year. Standard & Poor’s 500 Index constituents are poised to repurchase as much as $165 billion of stock this quarter, approaching a record reached in 2007. The buying contrasts with rampant selling by clients of mutual and exchange-traded funds, who after pulling $40 billion since January are on pace for one of the biggest quarterly withdrawals ever. 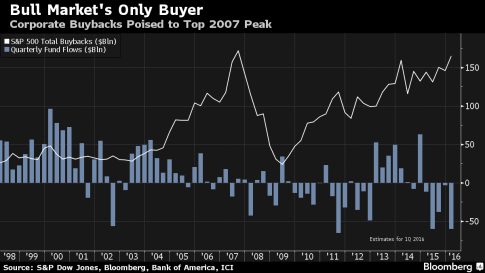 It gets better: in a far less exuberant note than last week, Bloomberg’s Lu Wang – author of the original article – writes that “while past deviations haven’t spelled doom for equities, the impact has rarely been as stark as in the last two months, when American shares lurched to the worst start to a year on record as companies stepped away from the market while reporting earnings. Those results raise another question about the sustainability of repurchases, as profits declined for a third straight quarter, the longest streak in six years.”

“Anytime when you’re relying solely on one thing to happen to keep the market going is a dangerous situation,” said Andrew Hopkins, director of equity research at Wilmington Trust Co., which oversees about $70 billion. “Over time, you come to the realization, ‘Look, these companies can’t grow. Borrowing money to buy back stocks is going to come to an end.”’

Even the banks are throwing up on the “rally”

Assuming Bank of America maintains a roughly 8 percent share in the total buyback pool since 2009 and the pace of transactions lasts through the end of March, corporate repurchases may reach $165 billion this quarter, data compiled by Bloomberg show. That would bring the 12-month total above $590 billion, an amount that’s higher than the record $589 billion in 2007.

“Corporate buybacks are the sole demand for corporate equities in this market,” David Kostin, the chief U.S. equity strategist at Goldman Sachs Group Inc., said in a Feb. 23 Bloomberg Television interview. “It’s been a very challenging market this year in terms of some of the macro rotations, concerns about China and oil, which have encouraged fund managers to reduce their exposure.”

Should the current pace of withdrawals from mutual funds and ETFs last through the rest of March, outflows would hit $60 billion. That implies a gap with corporate buybacks of $225 billion, the widest in data going back to 1998.

S&P 500 companies have churned out more than $2 trillion of repurchases since 2009, helping sustain a rally where share prices almost tripled. Bolstering the outlook for debt-financed buybacks, credit stress has eased since February, with the extra yield demanded on investment-trade bonds over Treasuries narrowing by 36 basis points.

The growth rate of buybacks is slowing as profits are poised for a fourth quarter of declines. After rising an average 37 percent in the previous five years, repurchases grew less than 4 percent in 2015. During the last two decades, there have been two times when earnings contractions lasted longer than now. Both led companies to slash buybacks, with the peak-to-trough drop reaching an average 62 percent.

It goes without saying that since the buybacks come entirely on the back of debt issuance, corporate net leverage is now the highest level in a decade, as Kostin warned last night, and urged investors to stay away from overlevered companies. 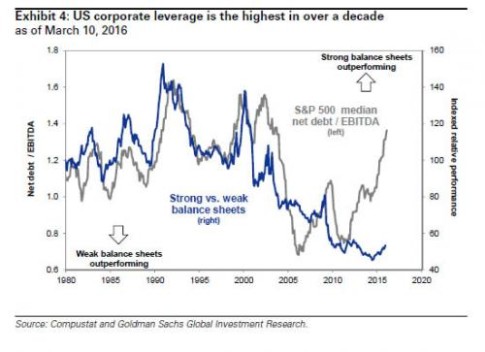 What we find most ironic, is that the author of the Bloomberg piece is the very same Wang last week wrote “What Doesn’t Kill Bull Market in Stocks May Make It Stronger.”

We wonder if this sentiment has been revised now that Bloomberg actually has the “big picture”, and realizes that the only thing pushing the market higher is bond issuance (courtesy of central banks) whose proceeds are used to immediately buy all the stock that investors are dumping.

Then again, maybe not for a while. After all, as we explained in under 140 characters last week, the only reason for the ECB’s expansion into Corporate bond QE was to boost the market by unleashing European stock buybacks.