Having discussed the market’s disturbing reaction to Mario Draghi’s desperate “all in” monetary gamble – one which saw an early bout of euphoria followed by one of the most aggressive Euro spikes in history, second only to the “December debacle” and the Fed’s March 2009 announcement of QE1, we were waiting for the just as important reaction by the ECB’s nemesis: the one country that not only has seen hyperinflation first hand (and appears to recall it vividly), but is just as aware where the ECB’s monetary lunacy ends: the Germans.

We got it from Germany’s Handelsblatt, when in an article titled “The dangerous game with the money of the German savers”, the authors provide a metaphorical rendering of what is happening in Europe as follows: 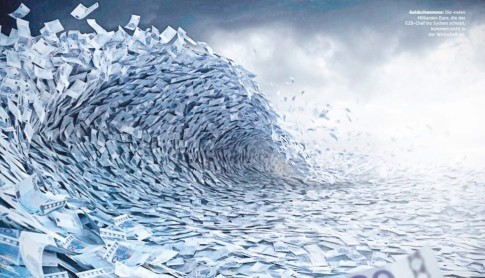 They also paint an oddly accurate caricature of the man behind this last ditch monetary policy: 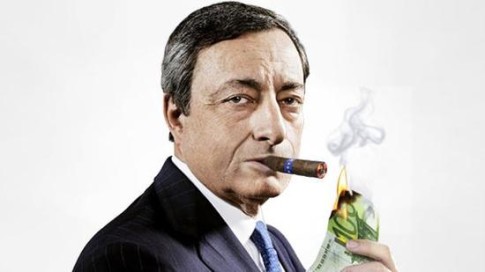 And write the following:

A determined ECB chief Mario Draghi plows ahead with his negative interest rate policy. The positive effects on the economy are low. Great, however, are the risks: this is the greatest redistribution of wealth in Europe since World War II.

It clearly got the ECB’s attention: former FT journalist and current head of media relations at the ECB Michael Steen promptly responded, calling the Handelsblatt article a “hatchet job” but congratulating it on the “lovely photoshop of cash tidal wave.”

Trying to find something nice to say about Handelsblatt hatchet job, there is a lovely photoshop of cash tidal wave pic.twitter.com/GqglBGwzdX

Whether the ECB’s PR office will be as glib in a few years when the full destructive nature of the central bank’s grand monetary experiment fully unravels, is unknown. What is known is that the war of words between Germany and Frankfurt’s most prominent, if increasingly despised, resident has just hit a new, and disturbing, plateau.