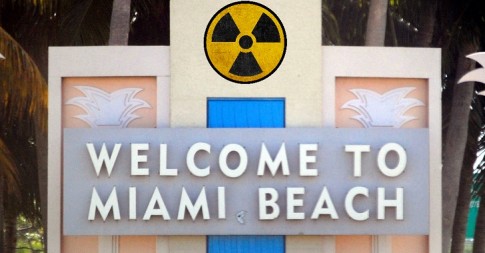 According to a study released by Miami-Dade County Mayor Carlos Gimenez on Monday, the waters of Biscayne Bay measured 215 times the level of radioactive tritium as is found in normal ocean water.

Tritium is a radioactive isotope traceable to nuclear plant cooling tower operations. In this case, the leak appears to be emanating from the aging canals in the Turkey Point Nuclear Generating Station located nearby.

“This is one of several things we were very worried about,” said South Miami Mayor and biological sciences professor, Philip Stoddard, as the Miami New Times reported. “You would have to work hard to find a worse place to put a nuclear plant, right between two national parks and subject to hurricanes and storm surge.”

Biscayne Bay harbors one of the largest coral reefs on the planet and is situated near the Everglades. Hot, salty water from the canals appears to be flowing back into both national parks, which has caused concern among environmentalists and others from the time Turkey Point planned to expand its reactors in 2013.

“They argued the canals were a closed system, but that’s not how water works in South Florida,” Stoddard remarked.

Tritium, a hydrogen isotope, is considered a precursor indication of leaks from nuclear plants, as it ‘travels’ or spreads faster than, and often precedes, other radioactive agents.

“While the tritium levels far fall below levels experts consider dangerous, the telltale tracer provided the critical link that high levels of ammonia and phosphorus in sections of bay bottom — pollution that is more damaging to marine life — likely came from the canals,” the Heraldexplained. Samples for the county monitoring study were gathered during December and January — and the tritium levels seem to show Florida Power & Light in violation of both local water laws and federal operating permits.

FPL, which operates Turkey Point, will likely receive another violation due to the leak — the county issued a citation in October for tainted groundwater — to force FPL to bring the plant into compliance, the Herald reported Tuesday.

After news of the report made headlines, critics, including environmentalists, nearby rock miners, and Rep. Jose Javier Rodriguez, came forward in full force calling for the Environmental Protection Agency to intervene in the matter.

“For years our state regulators have failed to take seriously the threat to our public safety, to our drinking water, and to our environment posed by FP&L’s actions at Turkey Point,” Rodriguez asserted, according to the New Times.“Evidence revealed this week of radioactive material in Biscayne Bay is the last straw and I join those calling on the U.S. EPA to step in and do what our state regulators have so far refused to do — protect the public.”

The leak also serves as possible confirmation for environmentalists who have suspected radioactive leaks from Turkey Point as the cause of algae blooms appearing in the bay for years.

Indeed, though FPL claims it continues to protect the health of the bay, as the Herald noted, Turkey Point has created issues for the waterways since the facility began producing more energy three years ago. “When you look at the big picture,” FPL environmental director, Matt Raffenberg, insisted, the canals “are not impacting Biscayne Bay.”

At a meeting on Tuesday, county commissioners discussed the imperative need to bring FPL and Turkey point into compliance with the law.

“We’ve had stop gap measures we’ve approved,” Gimenez said. “So far they’ve not proved to be the solution.”

Referencing the last time FPL was forced to implement changes following a lawsuit in the 1970s, he added, “It’s time we enter the 21st century.”

FPL’s continued problems with Turkey Point might have finally crossed the legal line by violating the federal Clean Water Act.

“There’s a certain validation to critics in seeing this result in the study,” Stoddard said. “But more important, it’s now crossed the threshold of federal law here.”